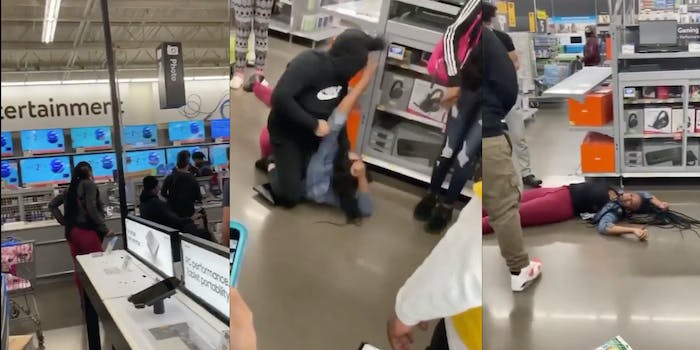 In the viral video, the verbal altercation escalates into a physical one.

A shouting match inside a Walmart for a PlayStation 5 turned violent—ending with one woman getting stomped in the face.

A woman with long braids is first seen shouting at another woman with a black hoodie. The former takes off her jacket, seemingly primed for a confrontation, Daily Mail reports.

At one point in the video, two bystanders attempt to intervene, but the woman in braids continues to shout, “What the fuck are you gonna do?” At that point, the woman wearing the black sweatshirt approaches the other woman, and they both start swinging.

People in the crowd watch, but no one intervenes at first. Many are seen recording the incident on their cellphones.

The woman in the black shirt eventually overcomes the woman with braids and begins slugging her in the head. The fight ends with the woman in braids being knocked down to the ground and stomped on until she gets knocked out.

After a few seconds, the woman with braids starts to come to.

According to TMZ, cops responded to the scene, but the women left the store before officers arrived—apparently without a PS5.