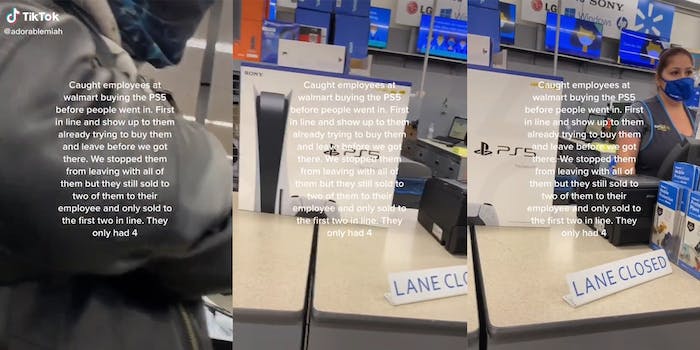 TikToker stops Walmart employees from buying every PlayStation 5 in store

The PS5 is tearing people apart.

PlayStation 5 hysteria has reached a fever pitch, inspiring all sorts of unscrupulous behavior and public freakouts from people just trying to cop the coveted new console.

TikToker @adorablemiah documented one example of this behavior in a video she posted yesterday. The clip, which has been viewed 62,000 times, shows several Walmart customers confronting employees who tried to ring up the store’s four PS5s for themselves.

Customers who had waited in line since 3:30am, @adorablemiah included, did not take kindly to the workers’ attempted swipe.

“They’re workers. That’s not right,” @adorablemiah protests as she and other early birds shoppers do a head count to see who should get the PS5s.

“I’ll get your names and we’ll go to Corporate,” another man says. “We’ll get people fired. Hell no, that’s not OK.”

“We all want one, but we gotta do what’s right,” @adorablemiah adds.

According to the caption on @adorablemiah’s video, the Walmart employees were already trying to buy the consoles and leave the store when the early customers arrived. The customers stopped the employees from leaving with all of the consoles, but two PS5s still ended up in the employees’ possession. That meant only the first two customers in line walked away victorious.

The PS5 shenanigans don’t stop after customers leave the store. A video posted to the r/Whatcouldgowrong subreddit on Friday morning shows a man exasperatedly scrolling through eBay listings for PS5s. Their prices are inflated by hundreds of dollars, which would already be insulting enough—but a closer look at the listings reveals them to be even worse than initially suspected.

“Original packaging only. That means you’re gonna get the box!” the man says incredulously. “That’s what the bid is: $700. Forty-four people are bidding on this. … These 44 people gotta be the stupidest 44 people in the world!”

The video has already garnered tons of sympathy, outrage, and amusement, earning more than 32,000 upvotes in just five hours.

A word to the wise to anybody looking to cop a PS5 in time for Christmas: Show up early, stand your ground—and if you do end up one of the lucky ones, please be a good sport about it.