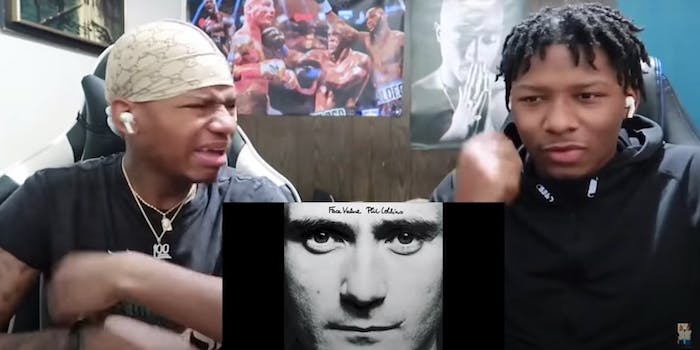 'I ain’t never seen nobody drop a beat three minutes in the song!'

One of the latest hits of yesteryear to get a critical reevaluation is Phil Collins’ “In the Air Tonight,” the atmospheric pop banger with an iconic drum break that’s launched a gazillion air-drum solos over the last 40 years. Tim and Fred Williams, the 21-year-old twin YouTubers who run the popular TwinsthenewTrend account, revisited Collins’ hit single nearly two weeks ago.

From the second they press play and the gloomy keyboard intro and stray drum pads set the tone, the twins can tell they’re in for a wild ride. As soon as Collins sings the first line—”I can feel it coming in the air tonight, oh Lord”—they need to collect themselves.

Tim and Fred keep vibing throughout the song’s brooding, low-key first half. Once the track reaches its boiling point—the massive, gated reverb drum fill—it literally knocks the twins back in their seat.

“He said, ‘I feel like y’all sleeping on me, let’s wake ‘em up,’” Fred says, adding, “I ain’t never seen nobody drop a beat three minutes in the song!”

“In the Air Tonight” earns a glowing review from the twins, with Fred saying Collins “killed it” and Tim calling the song “a straight banger.”

Tim and Fred have built an impressive following over the past year (185,000 subscribers and counting) by prolifically reviewing pop, rock, country, and even opera classics from long before they were born. Their reaction to Dolly Parton’s “Jolene” generated a whopping 1.8 million views last month, while their reviews of the Carpenters’ “We’ve Only Just Begun” and opera star Luciano Pavarotti have both earned over half-a-million views.

The “In the Air Tonight” reaction video picked up steam when Twitter user @tprstly shared it on Thursday, writing, “Two teenagers get schooled by Phil Collins.” The video has accumulated over 275,000 views, and if it keeps growing at its current rate, the twins might have another “Jolene”-sized hit on their hands.