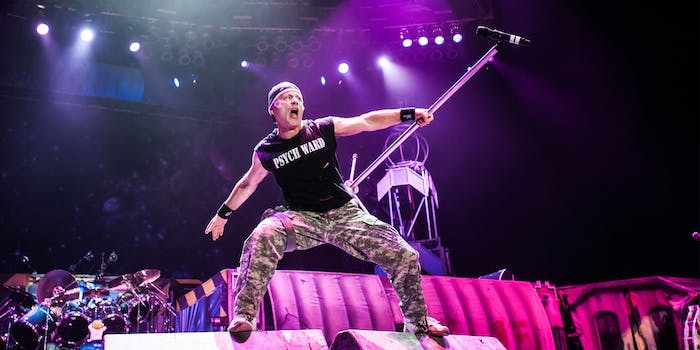 This YouTuber used A.I. to make a ‘new’ Iron Maiden song, and it rules

'Power Gravy' is a metal anthem in waiting.

Iron Maiden has remained one of the biggest and best bands in heavy metal for the last 40 years, as anybody who’s seen one of their incendiary live shows can attest. The hard-rocking Londoners haven’t released an album since 2015’s Book of Souls, but fans jonesing for new music can get a partial fix from YouTuber Funk Turkey, who used artificial intelligence to create a soundalike Maiden tune called “Power Gravy.”

Funk Turkey is the pseudonym of Arkansas-based comedy musician Kirk Connor. To make “Power Gravy,” he fed all of Iron Maiden’s lyrics from the Genius Lyrics Database into a program and created a new set of lyrics using the Markov chain. He also handled all guitar, bass, and vocal duties and programmed the drums himself.

The resulting “Power Gravy” boasts all of the Iron Maiden hallmarks, including twin guitar harmonies, galloping bass lines, and operatic vocals in the style of Bruce Dickinson. The A.I.-generated lyrics include zingers like “So understand, here’s my feet / Not some crazy dream” and “After all, go to the gravy / It’s always there, bleeding to the sky.”

“Vocals are….hard,” Connor confesses in the “Power Gravy” description. “Bruce Dickinson is very hard to emulate/impersonate, so I just did the best I could and hope it’s not awful. That man has golden pipes. It sounds like a South Park parody, but then again, it IS a parody, so…uhhhh…don’t take it too seriously.”

“Power Gravy” has already racked up an impressive 84,000 views since Connor debuted the video on Monday. He’s previously used the Markov chain to create a handful of other A.I. songs in the style of Metallica, Nickelback, and a particularly memorable AC/DC song called “Great Balls.” He initially rose to viral fame last August with his Billie Eilish parody “Dad Guy,” which has accumulated more than 3 million views.