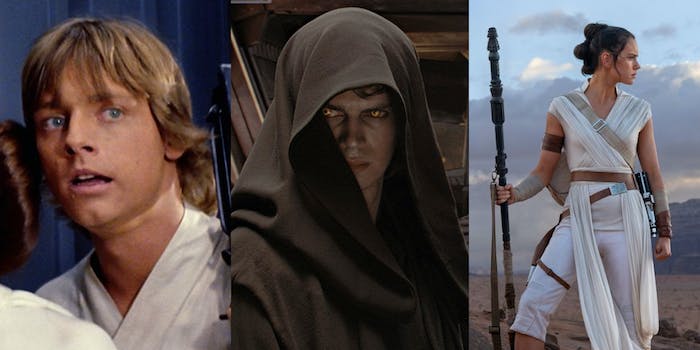 None of them are with the right movie.

There’s almost an art to naming a Star Wars movie: It has thematic resonance, can give you an idea of what to expect, and the best ones work on multiple levels or refer to more than one aspect of the film. They also, at least according to one TikTok user, can easily correspond even better to a different Star Wars movie.

The argument put forward by TikTok user fake.disney.facts is lighthearted in nature, and he doesn’t seem to be arguing for actually changing the Star Wars movie titles. But if you go through the entire Star Wars saga, his arguments make sense.

For instance, he argues The Phantom Menace should be called The Rise of Skywalker, and it only gets more mind-bending from there.

On TikTok, several users are making duets with the original video to demonstrate just how much it’s blowing their minds.

Despite the years and decades between some of the titles being switched around, all of the titles easily correspond to another movie via fake.disney.facts’ arguments. But in typical fashion with anything related to Star Wars, when re-uploaded versions of the TikTok went viral on Twitter, people had thoughts about how valid the arguments were. Which really goes to show the two constants of viral Star Wars content: It has the capacity to both astound viewers and make others want to correct it with their version instead.