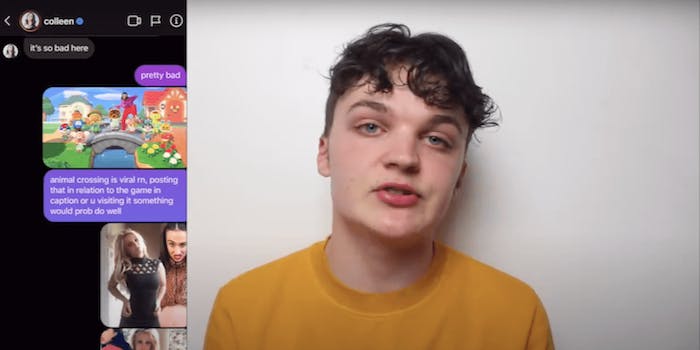 He also says he ghostwrote content for her without pay.

Colleen Ballinger, aka “Miranda Sings” on YouTube, is facing accusations from a 17-year-old fan of acting inappropriately with him and posting ghostwritten content without pay.

Until recently, Adam Mcintyre was a longtime fan of Ballinger and considered her a friend. In a video titled “colleen ballinger, stop lying,” Mcintyre, who used to run fandom accounts for the comedian and actress, announced he would be “disassociating” himself from her and would also be taking a break from social media.

Mcintyre said though he considered himself to be “good friends” with Ballinger, she asked a lot of him, like digging for information on her ex-husband on gossip websites. He said Ballinger “baited” him by subscribing to his YouTube channel, leaving comments on his videos, and even promising him a trip to America.

After helping her out, the teen’s name was dragged through the mud on these gossip sites, and eventually, his parents asked him to stop doing favors for Ballinger because of the hate he was getting, according to the YouTube confession video he posted.

Mcintyre said he would always help Ballinger though because he was “dumb, impressionable, young, naive, whatever I want to call it.” He was only 13 years old when she started forming a relationship with him, he said.

Mcintyre then said Ballinger, along with best friend Kory DeSoto, found his Twitter page during a live stream and thought he was so funny. They decided “to send [him] bra and panties that Kory was wearing during the live stream.”

Mcintyre said Ballinger and DeSoto made fun of how his parents would react to two adults sending him lingerie but did it anyway.

“Looking back at that, I’m still a minor, I’m still 17 […] I’m really disgusted at the situation, and confused honestly,” Mcintyre said. “They went on my Twitter because they thought it was funny and then they said they had to send me the bra and panties.”

Mcintyre then showed clips from the live stream, as well as a previous private video where he talked about the same incident.

After discussing the inappropriate behavior he is still confused about, Mcintyre moved on to more recent issues that made Ballinger “turn on him.”

Mcintyre said Ballinger started coming to him for tweet and video ideas in late 2017, knowing that “the Miranda character had passed its time.”

After Mcintyre started giving Ballinger ideas for new content, she reportedly told him she was considering him her “social media intern” with a possibility of moving into a paid position. Mcintyre showed the exact DMs where she allegedly suggested this. After that, Mcintyre said she then permitted him to post to her account directly.

Viewers were disgusted with Ballinger’s alleged behavior and demanded answers.

“She is a predator and a manipulator and if you support her, you are a sick person,” one Twitter user said.

Ballinger was accused of “grooming,” “gaslighting,” and “exploiting” Mcintyre.

Ballinger has not yet publicly responded to Mcintyre’s allegations. The Daily Dot did not hear back from Ballinger by publication time.