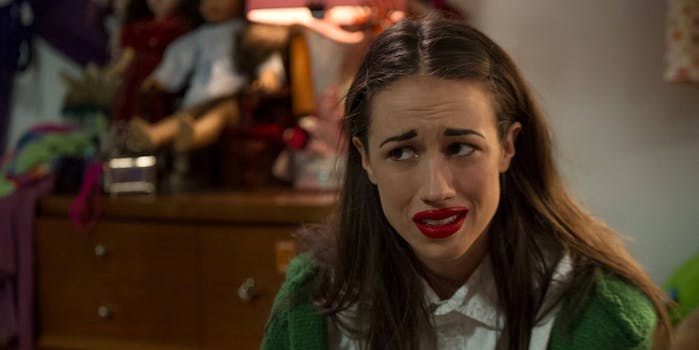 Netflix’s ‘Haters Back Off!’ is a family affair

Series co-creator Chris Ballinger on bringing the world of Miranda Sings to TV.

What is the allure of Miranda Sings? The YouTube star has 7 million followers and her videos often get more than a million views each. She’s appeared on Comedians in Cars Getting Coffee and wrote a bestselling book that tailed American Sniper on Amazon. Her act is carefully curated frump and unwavering confidence.

Miranda Sings is the alter ego of Colleen Ballinger, who also has a popular YouTube channel and is actually a good singer—unlike Miranda. Her fans will certainly be drawn to her new Netflix show, Haters Back Off!, in which her YouTube personality attempts to chase fame at all costs. But who else?

In the first episode, we’re introduced to Miranda’s performance style, as she pitch-shifts through a cover of Wicked’s “Defying Gravity.” Her creepy uncle Jim (Eastbound & Down’s Steve Little) is as delusional as she is, and attempts to live vicariously through her new media fame, since he had to give up his dream of ribbon-dancing. “You wanna know the secret to a successful viral video?” asks Jim. “You don’t stop until you’ve transmitted that virus to every single one of your fans.”

This is something she has managed to do in real life. Chris Ballinger, Colleen’s brother and co-creator of the show, says a big-screen version of Miranda Sings has been in the works almost as long as the character. They initially started writing a movie, but Chris says they realized they had “more stories to tell” and decided a TV show would be a better medium. They’re hoping to rope in fans and first-timers, but the latter might prove more difficult. Her schtick works in small, YouTube-sized clips.

“The show has its own unique feel that’s unlike the YouTube channel, in a lot of ways,” Chris tells the Daily Dot. “But there are so many little inside things, inside jokes, and little Easter eggs hidden even just in the set design; little things that were in videos she had on YouTube that are hanging up on the walls. We tried to really create things for the fans to find and get excited about.”

Her “fist” video—part of Miranda’s schtick is that she doesn’t understand words—is the catalyst for the titular haters. In another episode, Miranda does a cover of “Respect” as a message to her haters. That was the first cover uploaded to her Miranda Sings channel in 2008.

In the clip Ballinger hasn’t yet evolved to her signature bright red lipstick and over-exaggerated expressions. More covers followed, but more importantly, the character emerged as a reaction to commenters who thought she was being serious. That’s writ large in the final scene of the first episode, as her family comically overreacts to a deluge of negative comments on Miranda’s video.

Family is a big theme on Haters Back Off!, and the bridge to a more mainstream audience. Her mom Bethany, played by The Office’s Angela Kinsey, is sweet and oblivious, and the power dynamic in their mother-daughter relationship is severely skewed, which allows for more humorous moments. Miranda’s sister Emily is the measured one, and some of the best lines come from her exasperation.

Family is a big theme with the Ballingers, too. Haters Back Off! is Chris and Colleen’s first major TV collaboration, but he says that growing up, there was always a camera around. Chris has his own popular YouTube channel with his family, and Colleen often appears in those videos. They’ve worked together on her book and live show.

On her channel, Ballinger often references a mom and uncle, but they don’t appear in her videos. Chris says they’d always planned on revealing them later on, and Little and Kinsey do a great job bringing improvisation and pathos to the characters, but often the series leans too much on watching someone embarrass themselves.

Miranda Sings is parodying a very specific type of personality: the oblivious entertainer, which stands in contrast with many of the earnest young YouTube stars. When she started out, her videos and character were directly shaped by negativity. People would criticize her hair and the way she spoke. “Whenever people would get upset about the lipstick, Colleen would put on more lipstick,” Chris says. Her character illuminated the way women are often treated on YouTube and online.

But her unfiltered attitude and confidence, he adds, is what drew in fans. Those fans—as witnessed at this year’s VidCon, many of them are young girls—now dress and speak like her at shows.

“They’re excited about how free and liberating this character is,” he says.

As Haters Back Off! progresses, there are deeper explorations of the family’s emotional connection but nothing revelatory. There are also a few questions that linger: Why is Miranda homeschooled? Is this family just eccentric or more deeply troubled? What’s up with the incest undercurrents? Are these things just used for comedic effect?

As a TV show about dysfunctional family, Haters doesn’t feel fully realized just yet. It’s more a dark commentary on fame, the narcissism that fuels it, and how the internet has enabled us to never stop performing.