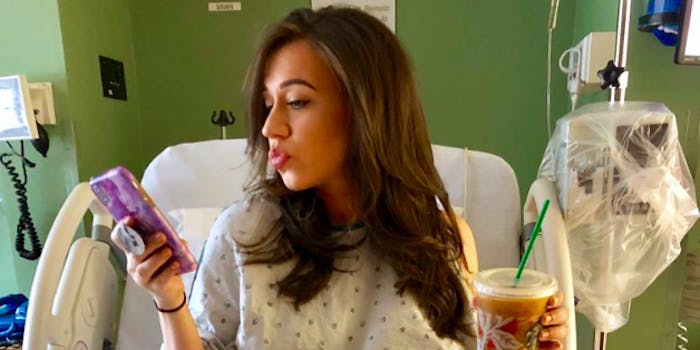 She says he is 'perfect.'

Yesterday, she tweeted a photo of herself in the hospital with coffee in one hand and her phone in the other, saying “here we go!”

Ballinger announced her pregnancy earlier this year along with her engagement to Stocklin, who she said her baby looks exactly like.

“Literally he looks exactly like Erik. it’s almost spooky how much they look alike. a full-on mini-me! he’s so cute!!! I can’t stop staring at him! he’s so perfect!” she tweeted.

literally he looks exactly like erik. it’s almost spooky how much they look alike. a full on mini me! he’s so cute!!! i can’t stop staring at him! he’s so perfect!

Last month, the comedian appeared as a pregnant cheerleader in her longtime friend Ariana Grande’s “Thank U, Next” video.

Grande sent Ballinger a last bit of encouragement after she shared she was in labor, tweeting to tell her “I love you so much.”

i love you so much @colleenb123

Now, we need photos of this new addition!