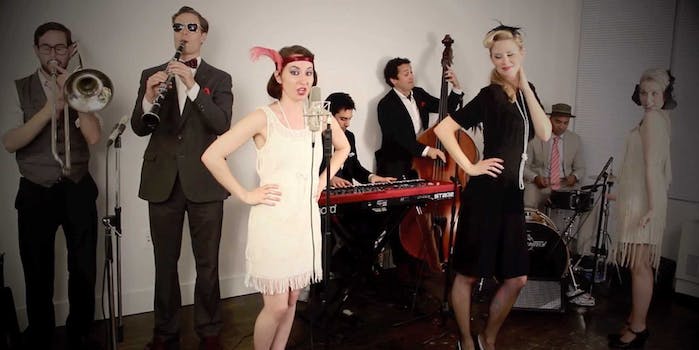 The sensational Scott Bradlee does a swingin' Psy cover.

All those antics Psy gets up to in his newest song sound a lot classier when you turn it into a jazz rendition that would fit in an alternative version of The Great Gatsby, complete with a brass section, the vocals of Robyn Adele Anderson, and flappers.

Some say you can feel magic with a kiss, but when you both are holding a deck of cards rigged with 330 volts of electricity, it’s more shocking than magical.

Set out in the middle of the woods, William Joseph and Lindsey Stirling come together to play a theme that many video gamers will recognize. It might not be the right time or planet, but you can still spot the stray soldier.

They’ve already gone through the same motions three times, but the Wolfpack finds themselves stuck in a place worse than death: a purgatory in which they’re forced to do more Hangover movies, and like Groundhog Day, there’s not escape.

Comedian Craig Robinson is given with a task to write a love song that will make women swoon. He finds a nail salon that conveniently has a piano in the back, hands out roses, and soon has them in stitches and singing along.