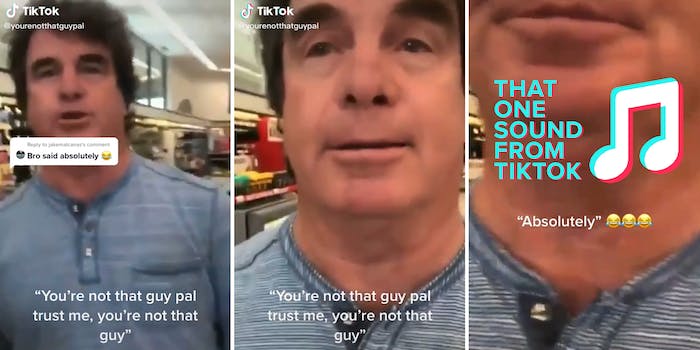 ‘You’re not that guy, pal’: Viral confrontation gets revived on TikTok

A viral video of an anti-masker is now making TikTok ask if they're 'that guy.'

The pandemic has given us so many self-produced short films of anti-maskers, “Karens,” and anti-vaxxers, a frightening collage of the enraged and entitled. Some we all know about. Others are more obscure.

I honestly hadn’t seen the original source of this week’s sound—perhaps it was lost in the noise leading up to the election. But it’s been revived and recontextualized on TikTok.

It was also applied to new Disney series Loki: “Lady-Loki after Loki tells her his plan to overthrow and rule the TVA,” wrote @jlikescomics.

The source video first went viral on Reddit, then Twitter back in October. On Oct. 26, the account Fifty Shades of Whey posted video from a confrontation at a Walgreens in Scottsdale, Arizona, in which a man got verbally aggressive with a 16-year-old and his older brother over face masks (which the man is not wearing). It has more than 1 million views.

In the longer video, he calls the person filming a “pimply little shit” and when the exchange gets more heated, he taunts him, saying, “You’re not that guy, pal. Trust me. You’re not that guy.” The person responds, “OK, and you?” He replies: “Absolutely.” As he leaves, he says, “Go vote for Biden” while grabbing his crotch.

In the original Reddit thread, someone claiming to be the older brother says that before he started filming, the man asked him and his brother why they were wearing masks, and called them “fucking Liberals.” He said the man also smelled of alcohol.

On June 3, the TikTok account yourenotthatguypal popped up, which seems to exist mainly to remix and meme the audio. But it also appears to be the origin of the most-used audio on TikTok.

The footage was also recently discussed on the H3 Podcast. In March, YouTuber Cr1TiKaL broke down the footage in a video titled “This Is A Tough Guy,” which drew more than 1 million views.

So who is the guy who says “You’re not that guy, pal”? Back in October, many people were gunning for him to be identified and possibly arrested in the Twitter thread.

In response to a person on Reddit asking if he’d been “doxxed yet,” the original poster says, “This is justice enough, he embarrassed himself in front of me and 3 others. And now, many more.”