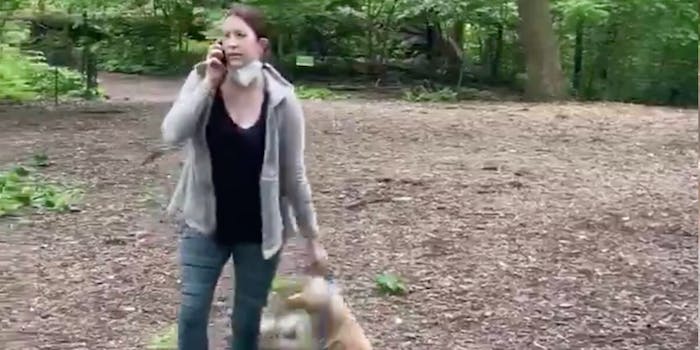 She called the police on Christian Cooper for asking her to put a leash on her dog.

Amy Cooper, who went viral after video showed her hysterically calling the police on a Black man because he asked her to follow the rules at Central Park, is now facing criminal charges for the incident.

The incident on March 25 took place on the same day that a white cop killed George Floyd, which sparked off nationwide protests that are still ongoing.

Christian Cooper, who is not related to Amy Cooper, was bird watching at the park when he noticed Amy Cooper with her dog that was running around without a leash, which was against the rules.

When Christian Cooper, who is Black, asked her to put her dog on a leash, Amy Cooper called the police, announcing on the phone that “an African-American man” was “threatening my life.”

The video went viral and Amy Cooper was fired, recirculating a much-needed conversation about the harms of calling cops on Black people for no reason or for trivial issues––or as in this case with Amy Cooper––for a white woman to call the cops on a Black man for simply asking her to follow the rules.

“Today our office initiated a prosecution of Amy Cooper for falsely reporting an incident in the third degree,” the district attorney said on Monday, according to the New York Times.

She is facing misdemeanor charges of filing a false report, according to the Times, which could lead up to one year in jail.

Her arraignment has been scheduled for October 14. If convicted, she could face either conditional discharge, community service, or counseling service instead of jail time.