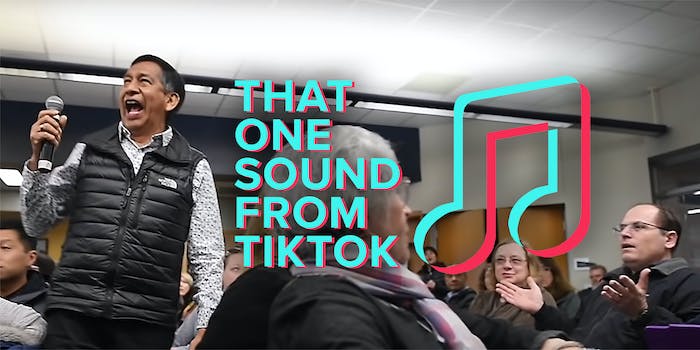 The sound has become popular on TikTok for goofing on public opinion.

Last week, I came across a TikTok that showed me the inside of my mind. The caption: “When you downloaded TikTok as a joke but now the inside of your mind permanently sounds like this.” The audio is just a cacophony of popular TikTok sounds.

On the one hand, I’m relieved I’m not the only person who carries this phantom TikTok sensation. On the other, showing this TikTok to friends or family would draw blank stares. Only people who spend hours on TikTok get it, but what is it?

Vox’s Rebecca Jennings recently wrote about the implications of using TikTok to dissociate, and what this constant stream of sound and vision might be doing to us. Were our brains meant to process this much information, on top of everything else we’ve experienced in the last year? We already know the answer, but I still fear I’m going to be hearing the Reese’s Puffs song in my head decades from now.

This made me think about the dissociation between source material and TikTok content; it’s not the only app where you can make memes out of more serious or tragic topics, but looking back on just sounds I’ve written about here, there’s a theme: Audio of an alleged pedophile, a senior citizen being robbed, and a girl singing through tears has been memed.

All this is to say, this week we’re unpacking a sound that’s become a funny trend on TikTok recently, but its origin is more complicated.

The most popular version of the sound appears to be from sasukepwr, posted in late March: The audio starts with a low rumble of crowd chatter and gasps before a woman loudly asserts, “You need to leave!”

Some of the most popular uses of the audio are in TikToks about being judged for doing something offensive or degrading at a funeral, but others depicted more timely examples of public embarrassment or outrage.

“When I ask for a straw in L.A.,” says user zizzysizzle.

“When you wear a mask in public in Florida,” says Aidan Scout.

There are some very specific examples, too.

The audio is from a February 2020 community meeting for Saline Area Schools, in Saline, Michigan, just south of Ann Arbor.

The meeting was held to address racism and inclusion in the majority-white district, and in this clip local business owner Adrian Iraola is relating a story about his adult son’s experience with racist name-calling when he was a kid. A balding man sitting roughly six feet away, identified as Tom Burtell, interrupts: “Then why didn’t you stay in Mexico?”

That prompts a chorus of gasps, then a woman who’s off camera exclaims, “You need to leave, that’s disgusting.” The audio on TikTok doesn’t include Burtell’s comment, so it seems like the woman is possibly telling Iraola to leave. (The way it’s edited on TikTok also kind of sounds like she’s saying, “You need to leave, bitch.”) Commenters on What the Audio’s post about the sound are surprised and relieved she’s not actually a “Karen.”

The clip became national news, but the meeting wasn’t random: It followed a January 2020 incident in which Saline High School football players made racist remarks and used slurs in a group Snapchat, and they reportedly sent messages like “the South will rise again” and “white power.” Student Kandhan Nadarajah told MLive: “One of the students that said those racist comments grew up a mile from my house. We went to the same classes, we went through the same system. That’s why it’s broken.”

The incident led to the creation of a student committee, with demands that applied to curriculum, resources, and mental health. In August 2020, there was another instance of racist remarks from a Saline student athlete.

The clip became something of a meme back in February, after it was shared again on Twitter, and people goofed on Burtell for looking like George Constanza. But those jokes obscure the casual racism of his comment, and a mindset that’s all too common: If you don’t like it here, why don’t you leave? (To be fair, some people did use the sound to address racism.)

The newest comments on the original clip are of course all people from TikTok, who are dissecting and critiquing the scene: “I legit came here thinking this ‘you need to leave’ was from a movie scene,” says one commenter. “Truth is stranger than fiction.”