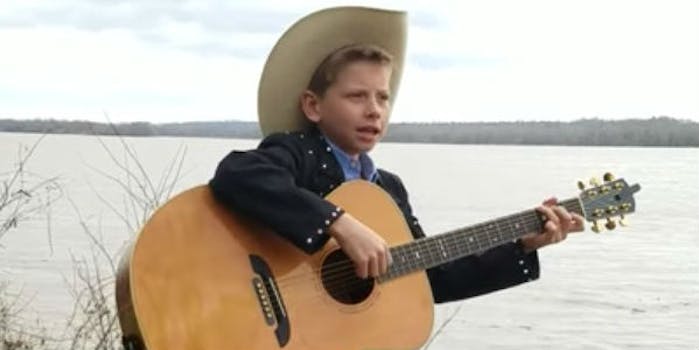 Walmart yodeling boy Mason Ramsey gets a gig at Coachella

In less than two weeks, 11-year-old Mason Ramsey has gone from regular Walmart singer to internet sensation to a performer at Coachella. Mason announced on Twitter that he will be performing at the California music festival with Whethan, a DJ, Friday at 2:45pm PT.

Hey guys I'll be performing at 245pm at @coachella with my friend @whethanmusic! See y'all there!

Mason went viral after a video of him yodeling in an Illinois Walmart store was shared on Twitter—and he was quickly propelled into stardom. Just this week, he appeared on Ellen and performed a concert at Walmart that was live-streamed on Facebook. The song that made Mason famous, Hank Williams’ “Lovesick Blues,” also rose to the top of Spotify’s charts.

He yodeled his way from Walmart to my show. You are not going to believe this kid. He is priceless. pic.twitter.com/Q56UuH5QUt

According to Complex, the two will be performing at the Sahara tent. You can watch a live stream of Mason yodeling here.

after the yodel kid followed me i dmed him to try and get him to come out as whethans guest at coachella. and it happened. ur welcome everyone. i love u mason and i love the internet pic.twitter.com/VSjLjS9mU4