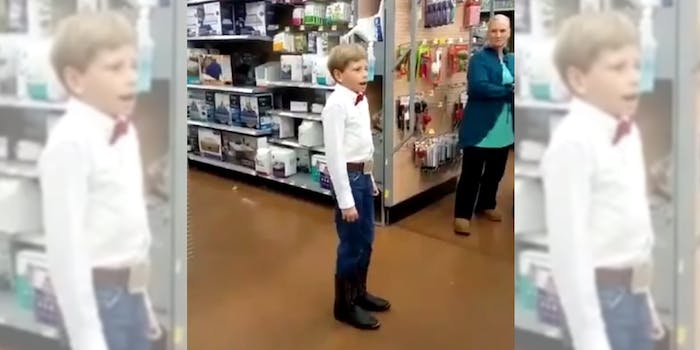 He's bringing yodeling back, y'all.

Yodeling is something of a dying art. You aren’t going to hear a lot of yodeling on the latest Bruno Mars or Ed Sheeran albums. But it’s still a beloved and respected art form in many parts of the country.

And perhaps this young tyke from Illinois is going to bring it back to the mainstream. His recent impromptu Walmart performance certainly has people taking notice.

Me: which aisle can i find light bulbs?

The talented singer is 11-year-old Mason Ramsey, and clearly, this isn’t his first performance. This video shows him singing and playing guitar at Kentucky radio station WVVR.

It’s not even the first time Ramsey has been captured singing in Walmart. Here’s a video where he’s being bribed to perform with Reese’s Peanut Butter Cups.

Here’s a free tip, kid: Don’t trust these adults. You can start asking for money now, and get all the Reese’s your heart desires.

The viral Walmart clip, posted by Twitter user @dumbassvegan (no word on whether he’s actually one or both of those things), has now been viewed over 16 million times. People are loving it.

But the fun doesn’t stop there. Now people are starting to make remixes… or at least attempts at them.

People are even making their own versions of the video, complete with “bored lady by shopping cart.”

No word on how Walmart feels about all this, but they’re going to need to step in if shoppers have to start dodging yodelers in order to buy groceries and laundry detergent.

Hank would be proud.