Remember Burger King’s “Proud Whopper?” The sandwich debuted last June in conjunction with pride month, the yearly celebration of LGBT people and their allies that takes place in June. The Proud Whopper was a nice concept on the surface, one tailor-made for an Upworthy headline: Major corporation recognizes queer customers in its first-ever LGBT campaign.

But the problem was the burger was only available for a very brief amount of time at exactly one location in San Francisco’s Castro district, meaning that it was statistically very unlikely you could ever bite into your own. As my colleague, Matt Saccaro, put it in a Daily Dot piece last year: It was one hell of a “whopper of a gay marketing ploy.”

Just a year later, Burger King has ceded the throne of gay marketing ploys to an unlikely heir: Hillary Clinton. The recently announced presidential candidate (and overwhelming frontrunner) recently unveiled some new T-shirts on her site that cater to her massive gay following. Called the “Loud and Proud Tee,” the shirt features a vintage photo of Clinton with the phrase “Yaaas, Hillary!” You can buy one right now for $30, provided you look good in blinding highlighter yellow. (You don’t.) 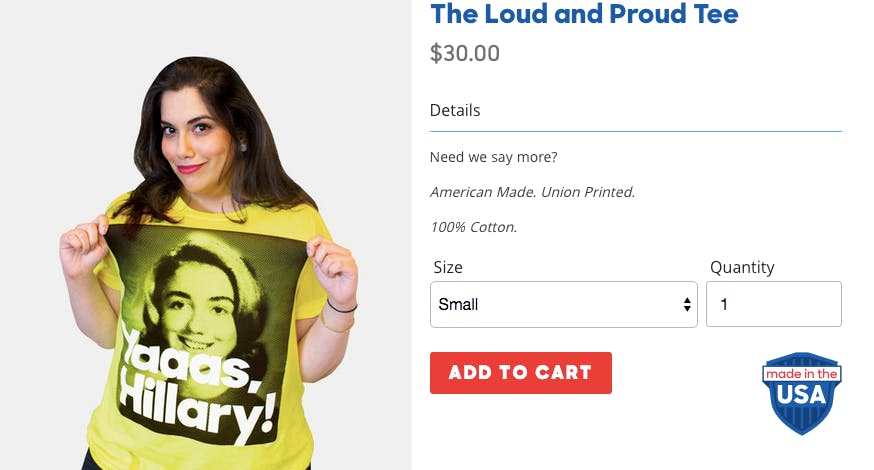 While her pantsuit game is on point, the former Secretary of State clearly needs a style check—and her color choices are the least of her problems. The phrase “Yaaas!” might be familiar to you from a massively viral 2013 video in which Lady Gaga’s famed “Little Monsters” and paparazzi swarm the singer’s apartment taking photos. One fan, however, calls to her from behind the camera: “Yaaas, Gaga! Yaaas! You look so beautiful.”

Although there’s some debate over the fan’s identity, NYC nightlife personality Johnny Versayce has been widely credited with the “Yaaas Gaga!” meme, which took on a life of its own on the Internet. “Yaaas” is now available as an option voicing your opinion a BuzzFeed post, the blogosphere’s newest favorite way of showing that they’re hip with the slangs of today’s youth. The word also made its way into a Nicki Minaj song—and even became the centerpiece of a memorable scene on Comedy Central’s Broad City, in which Ilana introduces the word to a little boy whom she’s babysitting.

According to the Atlantic’s Megan Garber, the phrase fills in a linguistic hole where a simple affirmative won’t do. Whereas “yes” might sound passive-aggressive (especially over text or email), “yaaas” allows us to exaggerate our excitement for effect.

The word “yes” is an extremely dull way to express the varied sentiments of “yes.” And the Internet, as it is wont to do, solved that problem by creating new ones. The disruption of “yes” likely happened for the same reason that so many web-spurred language developments happen, which is that digital communication lacks the tonal nuances that spoken language does. And also that people are awesome and creative and really, really good at finding clever ways to restore that tonality.

The problem is that while Garber explains that the word has been popular in drag culture since the Johnny Versayce video went viral, she doesn’t explain one crucial detail: It’s always been popular in drag because that’s where it originated, along with phrases like “throwing shade” and “reading.” Although the balls of 1990’s Paris Is Burning are a far cry from the cartoon couture of RuPaul’s Drag Race, the documentary has become an influential text for a generation of drag queens.

In the dangerous cultural climate of the ‘80s—after the twin outbreaks of HIV and Reaganism—the film documents the Harlem ball scene, which offered a refuge for queer, transgender, and gender nonconforming people living in New York City, particularly youth of color. The balls are famous for voguing, a style of dance later popularized by Madonna in her 1990 smash, “Vogue.” But what makes the film important (despite its continuing controversy) is its view of a subculture that not only celebrates the beauty of its members—including Dorian Corey, Willi Ninja, and Pepper Labeija—but also helps them survive.

As Tyler Coates explains in a post for Flavorwire, RuPaul’s Drag Race might be focused on “fashions at times so extravagant that they appear extraterrestrial,” but that’s not what the balls were about. “At the heart of the Harlem drag balls was the sentiment of ‘realness,’ of passing as female (or at least feminine),” Coates writes. For Venus Xtravaganza, a self-identified transsexual woman, this was a crucial distinction: “Walking” wasn’t just an imitation of strutting down the catwalks of Paris and Milan but about her desire to walk down the street without being harassed—or worse.

In 1988, two years before the film’s release, Xtravaganza’s body was discovered in a hotel room in New York. She was strangled to death.

While this document of queer life in a harsh decade survives, many of the 1980s ball scene’s members have not, which makes the erasure of its culture particularly galling. In a particularly ill-advised post for Bustle, Lucia Peters writes, “I’m unclear about when ‘YAAAS GAGA’ got shortened to simply ‘YAAAS,’ but these days, that seems to be its primary usage. Is it because interest in Gaga herself has waned? Is it because the Internet has an incredibly short memory?”

Considering the widespread popularity of RuPaul’s Drag Race, it makes sense that people—or even politicians—would want to participate in the culture that their lingo harkens back to, even while forgetting the vernacular’s original reference point. It’s how language works, even when it smacks of appropriation. However, there’s a huge, huge difference between your boss casually referring to “shade” in a meeting and using “Yaaas!” to make money for your presidential campaign. One is harmless, if a bit irritating, and the other is really, really disgusting, especially in the case of Hillary Clinton.

While Clinton is a vocal LGBT ally, she shouldn’t be let off the hook, especially when her husband was instrumental in escalating the War on Drugs during the 1990s, a racist campaign that disproportionately targeted black youths for low-level drug offenses. In an essay for Salon, Jeff Stein reminds us that Bill Clinton built “the world’s largest prison system—one that has devastated our inner cities, made a mockery of American idealism abroad, and continues to inflict needless suffering on millions of people. And he did it with his wife’s support.”

During President Clinton’s two terms, the prison population escalated—with 673,000 more Americans locked away in our overflowing penitentiaries. This was a staggering 235,000 more people than were imprisoned during the Reagan years, causing the federal incarceration rate during the 1990s to nearly double.

In a 1994 speech, Bill Clinton claimed it was necessary to curb America’s epidemic of violence. “Gangs and drugs have taken over our streets and undermined our schools,” Clinton argued. “Every day, we read about somebody else who has literally gotten away with murder.” But instead of making America safer, these policies only made it more divided and volatile. While Clinton upped the federal corrections allotment by $19 billion, he decimated funding for public housing, which shrank by $17 billion.

These programs would have provided crucial aid for Harlem’s black and queer youth, but it was easier—and more politically lucrative in a punitive era—to make urban populations into the enemy. Like Reagan before him, Clinton’s drug war was a war on the black and poor. As Dr. Boyce Watkins reminds us, “African-Americans are 62 percent of drug offenders sent to state prisons, yet they represent only 12 percent of the U.S. population.” Of course, that policy wasn’t Hillary’s doing, but as First Lady, she clearly reaped the benefits of it.

Hillary Clinton has recently announced her intention to tackle America’s mass incarceration problem, which is good, but she doesn’t get an automatic gold star on the issue yet. If she wants to truly show that she’s an ally to queer people, Clinton needs to recognize her own role in an issue tearing apart America’s cities—from Baltimore and New York to Ferguson. Allyship isn’t just having your design team slap your name on a pride-themed T-shirt. It’s taking responsibility for your mistakes.

If Hillary Clinton wants to slay at her campaign, she betta werk for change. Today’s queer youth need her.

Photo via kakissel/Flickr (CC BY 2.0)