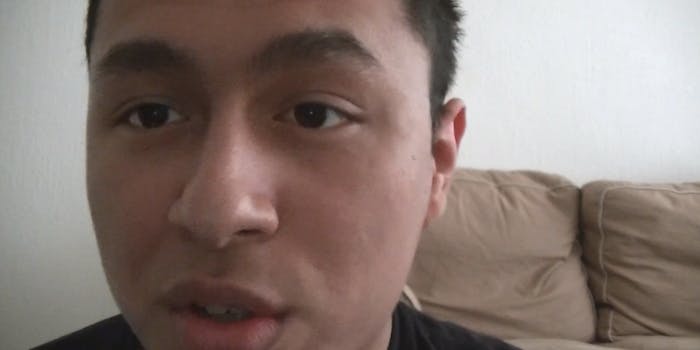 Here’s a great tutorial on how NOT to use Tinder

Considering how simple and effortless using Tinder is—swipe left, swipe right, and so on and so forth—there’s really no need for anyone to post a tutorial on how to use the app. But that’s exactly what YouTuber Kwart over party time did—and if the video is legit, it contains perhaps the worst dating advice you’ve received since your college roommate lent you his copy of The Game.


Kwart opens the tutorial by answering the eternal question: What kind of profile photos should you post to best increase your matches on Tinder?

The answer, apparently, is selfies of you riding a donkey, flashing a peace sign while your friend pukes in the background, and showing off the “Fuck the World” tattoo on your stomach. Because there’s nothing sexier than a man who loves animals, doesn’t puke, and adheres to a worldview that emo ninth-graders scrawl on their Converses during third-period English.

Of course, the timing of the Tinder tutorial post raises the inevitable question: Is Kwart’s Tinder tutorial real, or a hilarious April Fool’s troll? If you look at a few of Kwart’s other videos—his promo video, for instance, features a nude man in a horse mask nodding his head to Dutch hip-hop—the channel is intended to be comedic, albeit in an absurdist, non sequitur-laden, prototypically European way, so the Tinder tutorial vid very well might fall into the category.

But if it’s legit—and I kinda hope it’s legit—start combing Tinder for a non-puking man with “Fuck the world” tattooed on his abdomen, ladies of the Netherlands. You’ve got yourselves a real winner here.