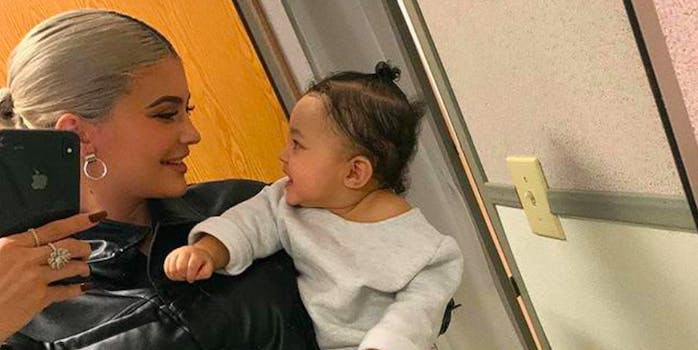 Most mothers hope their baby’s first word is “mama,” but Kylie Jenner is shooting much higher with her daughter Stormi. The 21-year-old posted a video on Instagram trying to teach Stormi to say “Kylie Cosmetics.”

“Trying to teach her some new words,” Jenner wrote in the caption of the video.

Earlier this year, Jenner told Forbes she’d like to pass on her cosmetics empire to Stormi. That said, it only makes sense that the reality star would hope the name of her company would be Stormi’s first words.

Although Stormi is only nine months old and can seemingly say barely any words at all, Jenner is heard slowly saying “Kylie Cosmetics” in the video and asking her to repeat it back. Stormi babbled while playing with none other than a Kylie Cosmetics palette. In the end, you can hear Stormi say “dada.”

“The fact that Kylie Jenner wanted Stormi’s first words to be ‘Kylie Cosmetics’ and not ‘mama’ KILLS ME,” someone else pointed out.

“I’m crying at Kylie trying to teach Stormi how to say ‘Kylie Cosmetics’ when she can barely say ‘dada’ lmao,” someone wrote.

We’ll be anxiously waiting for the moment Stormi is finally able to utter the words ‘Kylie Cosmetics.’