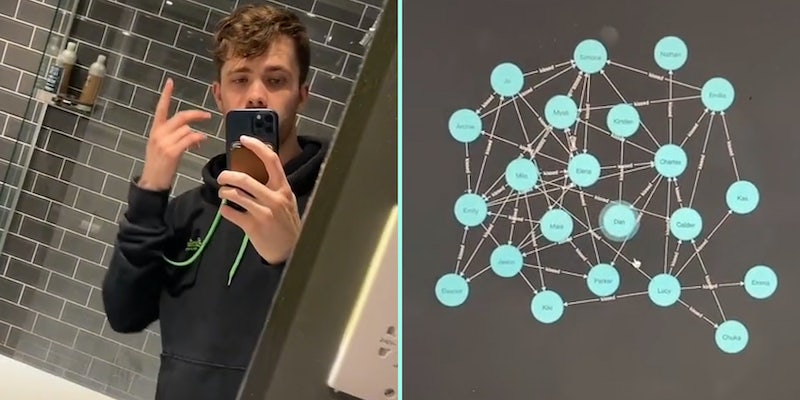 ‘They’ve all slept with each other. … They out-sl*tted math itself’: Worker tries to make diagram of co-workers who slept together

A man on TikTok attempted to make a diagram featuring who’s slept with whom, but he came to the conclusion that it was nearly impossible, saying “They out-slutted math itself.”

The man, known as Jack (@jaxk.mp4) on TikTok, shared a video showing the diagram. That video received about 1.4 million views as of Saturday.

“OK, so basically everyone at work is a massive slut. And they’ve all slept with each other, so I tried to see if I could model it into the space in a way that made any sense of how to order. And basically, it’s impossible,” Jack says in the video, showing the diagrams he made. “They out-slutted math itself.”

It appears Jack made two attempts at the diagram, with each one looking like a web of circles that each had a co-worker’s name written inside it. One name, Adam, was separate from the web with a single circle drawn around it.

Several viewers had something to say about Adam.

“But like, what’s Adam’s deal,” one viewer commented on the video

“You didn’t have to out Adam like this,” another viewer commented, insinuating that Adam hadn’t slept with any of the other co-workers.

One viewer said, “Poor Adam being left out.”

Some TikTokers took the opportunity to crack jokes about Jack’s workplace and diagram.

“‘Tell me about a time you had to overcome personal conflict with a colleague in a professional setting,'” one user said.

“Wow your workplace really IS a family,” another user wrote.

Someone else said, “is your workspace a bathroom?!? your work has serious questions that need answering.”

Multiple viewers jokingly asked Jack where he worked and if his employer is hiring, but the TikToker did not reveal his workplace’s name.

The Daily Dot reached out to Jack via TikTok comment.