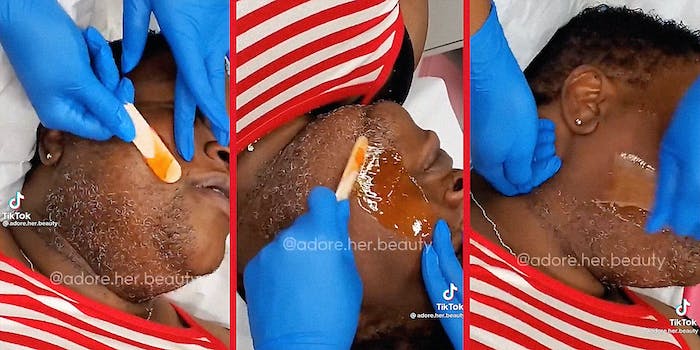 ‘I hate seeing people joke about this’: Viral TikTok video sparks conversation about women of color with facial hair

The video is receiving mixed reactions.

TikToker Reacee, who runs the account @adore.her.beauty, recently went viral for one of her videos about hirsutism, a hormonal condition that spurs thick, dark hair on women’s faces and upper bodies.

Hirsutism is particularly common in women of color, and it is often a side effect of polycystic ovarian syndrome (PCOS), a disorder that causes symptoms, ranging from insulin resistance and infertility to ovarian cysts.

In Reacee’s video, a client is getting her facial hair removed via wax. It’s been viewed 1.3 million times since being posted on May 1. It was also reposted to Twitter, where it similarly went viral.

The video is receiving mixed reactions.

Some are simply impressed by the client’s apparent incredible pain tolerance because of the way she’s seemingly relaxed and smiling as her facial hair is ripped off. “This looks so painful … she’s 10 times stronger than I will ever be. I was gritting my teeth just from watching,” one viewer on Twitter wrote.

The video was also met with misogynistic, transphobic comments by a few men.

Fortunately, many woman jumped in to shut the men down and attempt to educate them. “I hate seeing people joke about this (because) sometimes it’s a symptom of having PCOS, which isn’t a laughing matter,” one said.

Many also chose to share their own experiences with the condition and the way their facial hair, and the attitudes toward women with facial hair, make them feel. “This is one of my biggest insecurities,” one said.

Many are pointing out how the cruelty some people are dishing out over the video is harmful and misogynistic. “This comes with pcos … so I don’t get the ppl laughing the comments . This is why so many women with this issue feel insecure.. even if it’s not as severe as this,” a Twitter user noted.

Meanwhile, Reacee also continues to educate people about hirsutism and safe methods of hair removal over on her account. She’s showing women with this very common condition that they’re not alone and is fighting the stigma by discussing it so openly with her over 100,000 followers.