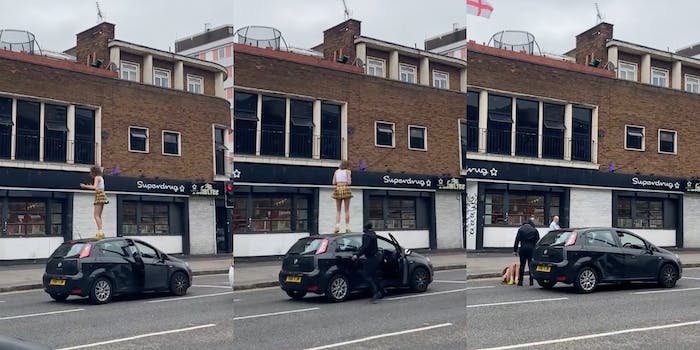 Video footage shows a woman jumping on top of a car in London, England before getting shoved off to the ground.

The video, shared by @AminNumeroUno on Twitter, reached almost 12,000 likes and about 2,100 retweets as of Tuesday. The tweet’s caption read, “Literally just saw this in forrest gate, its just crazy these days in east london..”

The Twitter user clarified that the woman jumped from the roof of the white Prius, which is shown in the video, onto the “bonnet” or hood of the black car in the video before climbing up the windshield onto the roof.

The video shows the woman on top of the black car hopping excitedly. Then the vehicle’s driver gets out of the car and pushes the woman’s ankles, appearing to make her fall off the car onto the side of the road.

As the man walks around the side of the vehicle, the woman can be seen scurrying away on her back as he yelled at her angrily.

Twitter viewers said the woman got what she deserved.

“100% in the right. Should’ve slung her off by her legs the muppet,” another user wrote.

“This is how nonsense like this should be dealt with,” another person said.

Others said the man should have just driven away with the woman on his car.

One Twitter user claims he saw the woman getting arrested near where the video was taken.

It’s unclear if that was actually the case, but here’s hoping she won’t go jumping on other cars in the future.