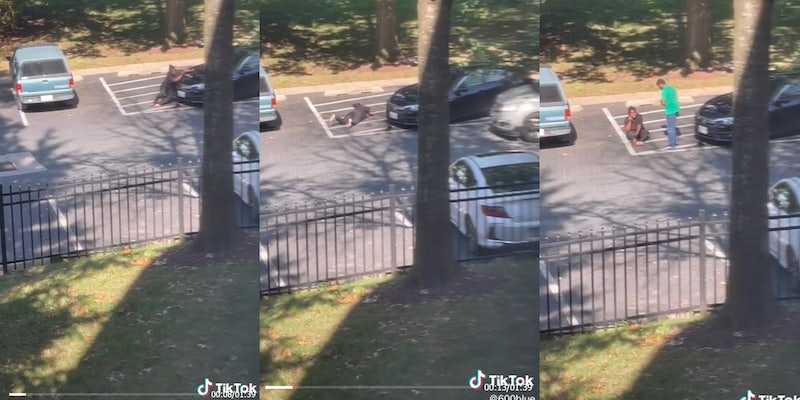 ‘That was fake’: TikToker films woman allegedly faking injuries after trying to block car with her body

'She forgot which ankle at the end'

TikTok user @600blue posted a video showing a woman allegedly faking an injury after standing in front of a slow moving car.

In the video, the TikToker is pointing the camera out of a window, showing a man driving a car and a woman standing in front of it. The woman is seen with her hands on the car, and it looks as if she is blocking the man from leaving, but the man continues to drive slowly. The TikToker described the man as the father of the woman’s child.

The woman then hits the car, falls, and screams that her leg is in pain. As she continues to roll on the ground, the man gets out of the car and stands next to her.

The TikTok read, “ain’t no way my boy.” The person recording the video says, “That was fake, that was fake.”

In the video, it appears that the woman was on the phone with someone while she continued to yell and roll on the ground, screaming that her leg is hurting. She tells the person on the phone that the man hit her with his car.

The woman then looks at the man and says, “My ankle, my ankle is fuckin swollen.”

As the two start to argue, the man tells her that he did not hit her, and the woman yells at him to help her stand up. She says she needs to go to the hospital.

The man tries to help the woman stand up, but she starts to cry and scream in pain. The man then puts her back on the ground and walks away.

Many viewers in the comments accused the woman of faking the injury.

“That flop straight from the Lebron James school of flops,” @1sgmag said.

“All I can hear is the fish from Spongebob screaming ‘MY LEG’,” @thesingulardave said.

“She forgot which ankle at the end,” @puredevotion said.

While a majority of viewers were calling it theatrics, there appeared to be one TikTok user, @jkiss3124, who claimed to know the woman and defended her cries. She wrote that viewers don’t know the whole story. The Daily Dot reached out to the user via TikTok comment.

It is unclear if the two went to the hospital or if the police were called. @600blue did not immediately respond to the Daily Dot’s request for comment on Instagram.