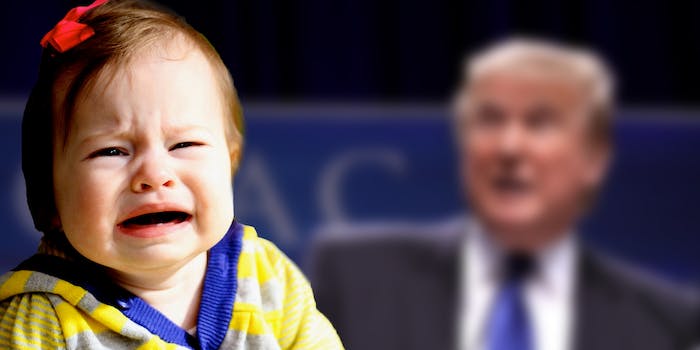 Kids say the darndest things—except when they don't.

Each American generation believes it’s living through the most politically contentious time in the country’s history, but there’s some evidence to suggest that this time, it’s true. And, because political discourse is now conducted within the hyperbaric chamber of Twitter, we carry the constant, roiling debate around in our pockets.

Message board flamewars once mercifully ended via Godwin’s Law now go on and on as the same rote talking points echo through Twitter’s many overlapping micro-habitats. Nothing new is said. Nothing is resolved. Still, the struggle must escalate. And so we come to the latest popular tactic: bringing your precocious toddler into it.

And then came the woke tots, terrified of Trump’s potential for tyranny:

Because my 4 year old can read, he's now announcing that "Trump is a bigot." Uhhh… Any suggestions? #awkward #nevertrump

My 7 year old just asked if Cruz or Trump wins the election can we move to Canada. That's how we know he is gifted.

Congratulations, your humblebrag has socially signaled how good and correct your political beliefs are. And like every parent in modern history, you have successfully transmitted these beliefs to your offspring. You are progressive, and your kids are smart.

Youngsters inherited their parents’ fears about Dubya the Dummy and Obama the Muslim Antichrist, too, and probably delivered words full of pith and pathos about them. The difference is that Twitter didn’t exist during the 2000 campaign, and was still on the verge of mainstream acceptance in 2008. Now it’s yuge, and so is Trump—of course kids are going to say the darnedest, most tweetable things about him.

Or, if they don’t, competitive parents are going to pretend they did.

But “why do people keep putting fake woke words in their kids’ mouths. what caused this terrible virus to spread,” asks astute writer and British person Libby Watson.

My 4 yr old daughter, seeing a picture of Donald Trump, asks me "why is that man so afraid daddy?" "I don't know, sweetheart, I don't know."

Although funny people on Twitter had noted and critiqued the spread of the new political baby underclass beforehand, Marche’s tweet was the tipping point. No one believed his story; he was subject to fierce and immediate ridicule.

the two-year-old son of my olmec head gf— who is a model by the way— laughed at this while I was devouring descartes pic.twitter.com/rAq6hwQMPf

My six-year old asked me about Donald Trump, and it just shouldn't be this hard to talk to your kids about those who aspire to lead them.

But it was Marche’s tweet that brought the smarmy, possibly disingenuous trope of Trump-hating kids to Weird Twitter’s attention. The result is a two-day roast of the conceit that it’s somehow novel for a child to inherit his parents’ political alignment, class consciousness, or fears for the future.

It is brutal, it is funny, and it almost justifies discussing politics on Twitter.

Update: It’s been brought to my attention that there were some earlier, very good instances of the woke toddler joke by Sean McElwee. These were retweeted a large number of times, and probably precipitated the trend. Here they are:

my two year old daughter just asked me "daddy, when will the working class throw off false consciousness and seize the means of production?"

— the supreme court will destroy everything we want (@SeanMcElwee) January 14, 2016

my two year old son just asked "daddy, why does the media treat moderate leftism as a threat to society but laugh off fascism on the right?"

— the supreme court will destroy everything we want (@SeanMcElwee) January 31, 2016