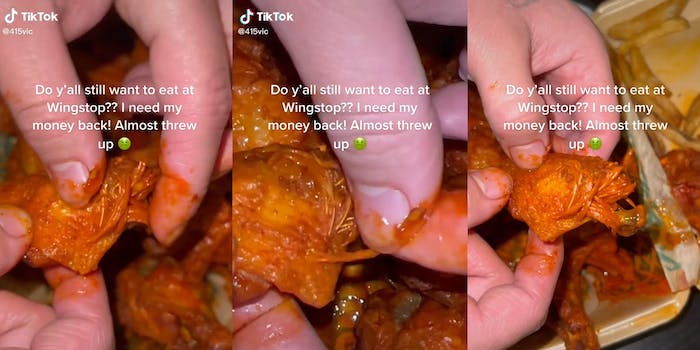 'Do y'all still want to eat at Wingstop??'

People are often grossed out by the pre-frozen, artificial nature of fast-food orders. But if you want real chicken, you may have to face the consequences—as one TikToker recently found out.

In a video that’s now been viewed more than 3 million times, TikToker Victor Orellana (@415vic) called out the chicken wings chain Wingstop for leaving actual feathers in his order.

In the TikTok, you can see him pulling on feathers that are still attached to the meat, covered in sauce. “Do y’all still want to eat at Wingstop??” he wrote. “I need my money back! Almost threw up.”

Some people in the comments section were similarly grossed out, but many others were unimpressed. “Idk how to tell you this,” one commenter wrote, “but every wing you’ve ever eaten came from a chicken with feathers.”

“at least we know the chicken real,” another wrote. Someone else added that they used to work at Wingstop and that “it’s hard to pluck up all the feathers when it’s busy but at least you know it’s not fake chicken.”

In a follow-up TikTok, Orellana showed a screencap of a supposedly-deleted comment from the official Wingstop account: “That’s not cool on us. Can you please use the button on our profile to email us? Our team wants to further assist you.” Orellana added that when he emailed them, they never responded.

However, Wingstop followed up with another comment saying that its office was closed for the holiday, hence the delay in replying. It also denied deleting its original reply.

The latest update came in the form of a comment from Orellana on the original TikTok, saying “My intentions were just to be funny and dramatic nothing else. Wingstop asked for my receipt so I sent it.”

The Daily Dot has reached out to Wingstop via email and Orellana via TikTok comment.