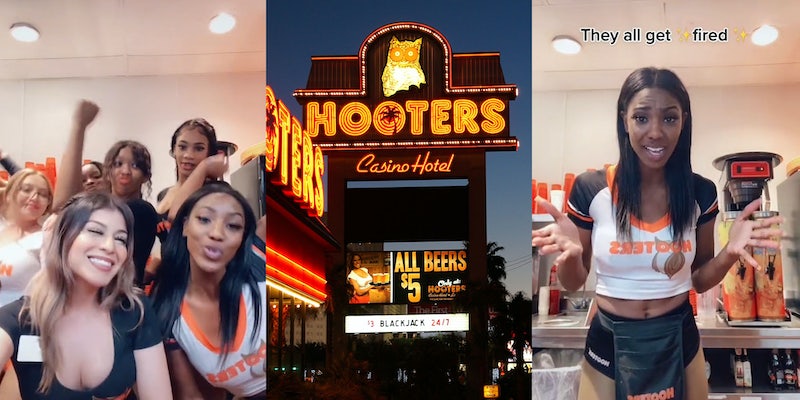 ‘I feel like they have rules like high schools do’: Hooters worker shares reasons why her co-workers got fired in viral TikTok, sparking debate

'What is this? The military?'

A Hooters employee shared in a TikTok video that her coworkers got fired, and the reasons for their terminations have viewers shocked.

The restaurant chain, which serves traditional bar food, is known for its attractive young female staff who wear the uniform of short orange shorts and low-cut tops.

Jardin May (@jardinmay) posted the video on TikTok, originally shared a video of herself dancing with five of her Hooters coworkers. Then, it cut to her alone, where she said they all got fired.

In a highly requested follow up video, May explained why the women were fired from Hooters.

According to May, one of the workers got fired because she showed up late to work. Usually, arriving late warrants a written warning from management, the TikToker said.

When the manager tried to write-up the employee who was late, she pointed out other employees who show up late without getting written up. May said the worker “got an attitude” about it, and the manager wrote her up again.

The worker started yelling and screaming, May said, which resulted in a third write-up and termination.

Another got fired because of her hair, May said. According to the TikToker, one of the “main rules” at Hooters is that employees have to maintain whatever they looked like when they were hired. She had dyed her hair red, and when management told her to change her hair back, she refused and was terminated.

A third girl technically wasn’t fired — only because she quit before management could say she was fired.

Employees are allowed to have one stud nose piercing, May said. But this employee had one stud in each nostril, and a hoop septum piercing. She was fired as she refused to take her piercings out.

Finally, the last girl was fired because a customer called the restaurant saying their bill was higher than what they had left — meaning they thought the server changed the tip amount.

Sometimes, that can happen, May said. The TikToker explained that the workers alleged mistake was most likely an unintentional typo.

“Not that we’re like changing anybody’s tips intentionally, but our store is a really, really busy location,” May said in the video. “So when we’re rushing and stuff, it is very easy to like mistype a tip.”

On top of those four girls who got fired, another four transferred to a different location and two others left to a competing store, the TikToker said.

Viewers were disgruntled at the reasons May listed for her coworkers getting fired. One said Hooters seems “strict as hell.”

“damn they’re strict as hell i’m glad i don’t work with a corporate restaurant,” the viewer commented on the video.

Another commenter said Hooters might as well fire employees for breathing.

Some viewers said the rules seem suited to the military or to high school.

“What is this? The military?” another asked. “The military has more flexible rules than that!” someone else said.

One viewer asked how employees are even supposed to keep track of all the rules.

In a reply to the question, May wrote in a comment, “I’ve been with Hooters for 7 years and worked at 8 stores… different stores are strict on different rules so I’ve just learned them all.”

The Daily Dot reached out to the creator via TikTok comment and to Hooters via press email.