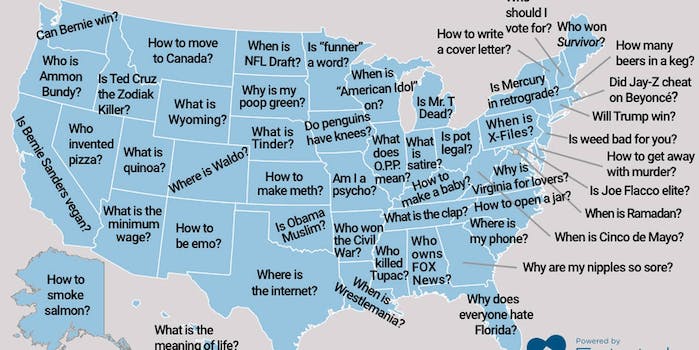 The question each state Googles more than all other states

Wyoming's question is way too meta.

Estately is back at it again with the gratuitous Google data. Known for its maps breaking down Google queries by state, the real estate website has found yet another way to make you concerned about your fellow American citizens.

Using a combination of autocomplete and 12 years of Google Trends information, Estately has discovered the questions each state asks the most compared to the other 49 similarly inquisitive states. 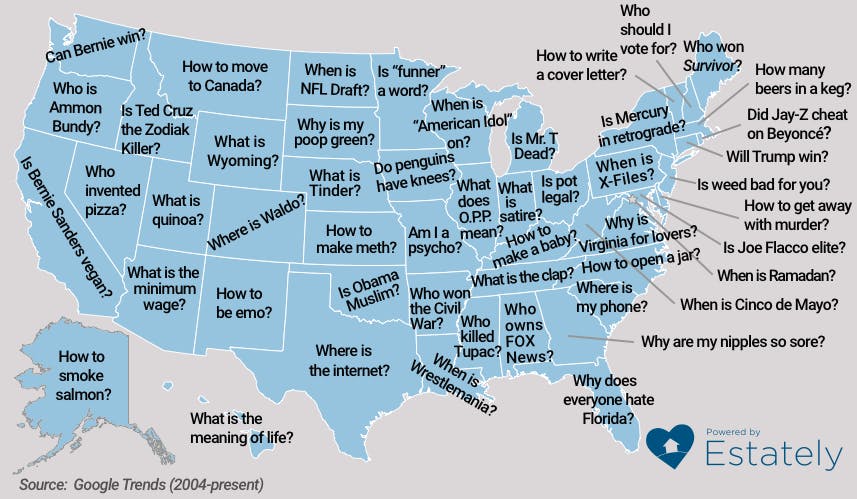 If you think this map is disconcerting, try delving deeper into the many searches that keep folks up at night around the country.

Just three states were stumped by singular questions from 2004-2016. Alaskans still have no idea how the fuck to smoke salmon, Minnesotans are worried about just how fun they are, and Wyoming has been caught in an existential crisis for the better part of this millennium.

Regarding food-related inquiries, California is deeply concerned about its diet. Perhaps another kind-hearted state can explain to them about Jello, bacon, coconuts, coffee, bread, and honey. Bonus points if they do so at the nearest Starbucks, effectively answering yet another question curious citizens of the Golden State have become preoccupied with.

You can check out the entire expanded and awful list on Estately‘s website. By the time you’re done perusing, you may be more aligned with Montana than any other state. “How to move to Canada?” Right there with ya, Treasure State.