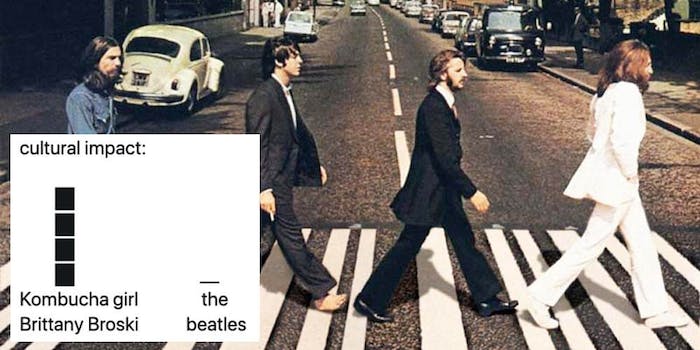 This ‘cultural impact’ meme is revisionist history at its best

What did the Beatles do to deserve this??

Who’s to say what makes a cultural touchstone great? Ticket sales? Critics? The unwashed masses?? Of course, culture—whether it pertains to film, music, television, theater, or what have you—is very subjective, which is what we have to thank for a tongue-in-cheek new “cultural impact” meme taking over social media.

According to Know Your Meme, the cultural impact meme appears to have originated just over a year ago in June of 2018, when Twitter user @prasejeebus tweeted the following chart comparing the respective impacts of 26-year-old actress and pop singer Miranda Cosgrove to Elvis, the Beatles, and U2.

Clearly, most music fans would take umbrage with ranking Cosgrove, who to date has released one album, Sparks Fly, which peaked at number eight on the Billboard 200 chart in 2010, over Elvis and the Beatles. Or even, just Elvis over the Beatles! (On the other hand, the placement of U2 is fair, at least in this author’s opinion.)

At any rate, while the tweet went mildly viral at the time, the meme sprung up on Twitter again in the past week when @SaddestCowboy_ tweeted a similar version–this time, pitting the cultural relevance of the viral “Kombucha girl” meme, a.k.a. Brittany Broski, against the Beatles.

Just a short time later, another user tweeted the cultural impact meme stacking up Avril Lavigne’s 2002 hit “Sk8er Boi” against The Beatles. The joke here is obviously that the Beatles are typically regarded as the most influential rock band of all time.

But like, to be fair, “Sk8er Boi” is also quite the banger?

As such, the earlier examples of the meme typically pitted “X,” represented by the four stacked black squares, against The Beatles, which are represented by a small, thin line.

Many—okay, most—of the examples are spot-on and involve K-pop in one way or another, but this is Twitter and we only have so much time.

As the meme continued to go viral, people began dropping the Beatles altogether in favor of even more facetious versions of the cultural impact meme—such as comparing Kid Cudi to Beethoven, Family Guy to the History Channel, and so on and so forth.

And then there’s this example, that plays off of the shape of the blocks in the cultural impact meme as it applies to the classic puzzle video game, Tetris.

The Tetris piece The Tetris Piece
you want. you get

Ain’t that the truth, though! It’s like the game gets off on being withholding.