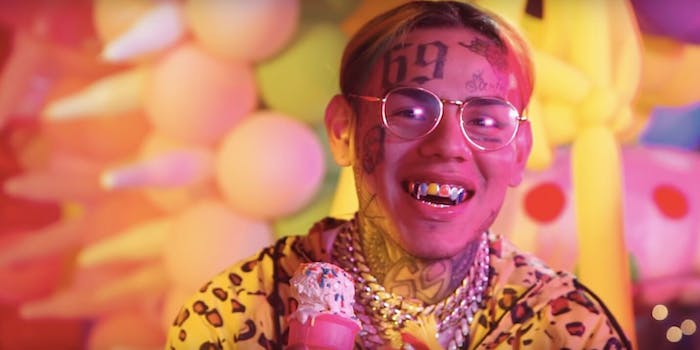 It’s been a long year for rapper Tekashi 69, aka 6ix9ine.

Born Daniel Hernandez, the rapper was known for his brash “gangster” image, often taking photos of himself with guns, shouting out gangs in his songs, and picking fights with other rappers. Unfortunately, though, Hernandez is now facing consequences for his “gangster” image.

The rapper is currently on trial for drug, racketeering, and weapons charges. He secured a plea deal with the prosecution for a reduced sentence in exchange for his cooperation, and now he’s naming names in the courtroom. Naturally, his new name has become “Tekashi Snitch Nine”.

Has anyone used Tekashi snitch 9 yet? It’s clever.

And the memes which have followed have been endless.

*Tekashi will you continue to be a snitch yo whole life?*

Tekashi looking at the new stack of paperwork of people to snitch on pic.twitter.com/NEqUm5C1Vy

Tekashi gettin pressed in prison by other snitches
pic.twitter.com/fItrhIFyDx

Supporting tekashi after he snitch his way outta prison is like openly saying you support snitches, fake gangsters, ball cappin.

This culture is shot

Hernandez first became known after his song “Gummo” went viral. From there, he made more quick-hit songs, including one with Nicki Minaj. But during his short career, charges have haunted him. In 2015, he was sentenced to four years’ probation and 1,000 hours of community service, after having pleaded guilty to a felony count of use of a child in a sexual performance. Last year, he was arrested for the charges he currently faces, and the penalty is nearly 47 years in prison.

During his current trial, Hernandez admitted to being part of the gang Nine Trey Gansta Bloods—a crew he often mentioned in many of his hit songs, and he said that the gang had much control over his music career and his job was to promote the gang image. Things turned sour last year when Hernandez was kidnapped after there was a conflict within the gang over who would control his music career.

“I knew the formula was to repeat it,” Hernandez said in court. “The gang image, like promote it.”

Hernandez also has told everyone in the court basically everything about his life in the Nine Trey gang. In addition to giving names, he has also been translating street slang, giving intricate details about attacks, including one on fellow rapper Trippie Redd. Hernandez even told the court the gang affiliations of other rappers.

In other words, Hernandez is trying to avoid spending the rest of his adult life in jail.

But street gangs and rap have long been interconnected, so many have stated that Hernandez is offering a rare look inside the mechanisms of what ties the two together. However, those within the rap community are less than pleased. Even Snoop Dog allegedly said that Hernandez was a “rat” and should “rot” in an Instagram comment.

Things are so high stake for Hernandez that prosecutors have stated that he may need to enter a witness protection program–if he is ever released back into the world.

But if anything, Hernandez’ quick rise and quicker downfall have shown the dangers of posting images on social media just for fame and clout. When asked what his hit song “Gummo” was even about, the rapper responded, “It’s a song towards, like, somebody who I didn’t get along with,” he said. “I don’t know. I thought it was cool at the time.”