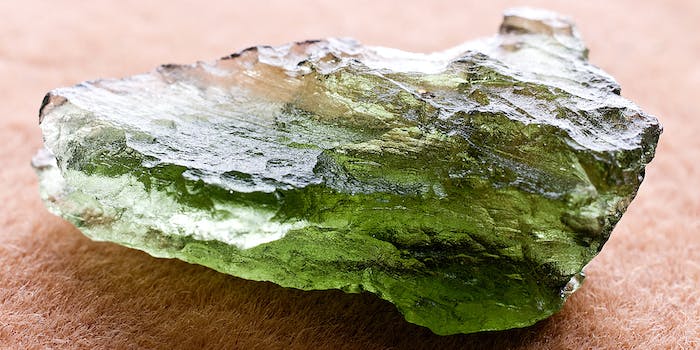 What is Moldavite? Crystal TikTok is obsessed with this supposedly dangerous space rock

Crystal fans on TikTok report wild and life-changing side effects from buying moldavite.

The crystal healing side of WitchTok has a new favorite rock: Moldavite, a moss-green meteor tektite that can supposedly throw your life into chaos. We say “supposedly,” because crystal magic has no scientific basis. But TikTok is still full of people reporting wild side-effects from buying moldavite, spawning memes about giving moldavite to your enemies (and/or parents) to ruin their lives.

Riffing on the “$19 fortnite card” meme, one viral TikTok seemingly blames a “$40 moldavite earring” for crashing a car.

According to crystal TikTokers, moldavite can act as an “amplifier” and “remove obstacles between you and the path that you’re meant to be on.” In other words, they believe it can spur on major life changes like breakups or even deaths. One TikTok shows a girl crying and warning people not to buy moldavite, which of course inspired more people to buy moldavite and see what happens:

Meanwhile, other TikTokers attribute more positive changes to the power of moldavite, like getting into new colleges and relationships. Right now, we’re in the middle of two moldavite waves: people who bought the crystal last autumn and are reporting long-term effects, and people who bought it over the past couple of weeks and are sharing scare stories about chaotic breakups and their parents getting cancer.

Crystal healing is based around the belief that certain crystals vibrate at special frequencies, and can be used to heal physical ailments or alter your spiritual energy. The past few years saw a surge in popularity for crystals, with celebrities like Gwyneth Paltrow and Kim Kardashian popularizing the idea that crystals can change your mood or bring specific “energies” to your surroundings. Some people just enjoy the aesthetic, but like many elements of 21st-century wellness culture, crystal healing has become a lucrative and ethically murky industry.

Over on WitchTok, the situation is more low-fi and DIY. People are sharing PSAs about moldavite’s allegedly life-changing impact, and posting diaries about weird stuff that happened after they started wearing moldavite jewelry.

The moldavite craze is already inspiring memes about the rock’s dangerous powers, including people lip-syncing a line from the movie Labyrinth. “It’s a crystal, nothing more,” says David Bowie in menacing tones, as teens joke about giving moldavite to their parents.

If you don’t believe in crystal healing, moldavite is basically just glass. It’s space glass from a meteorite impact 15 million years ago, which is pretty cool. Otherwise, it has no unusual or dangerous chemical properties. And according to Geology.com, there are a lot of fakes out there. It’s entirely possible that some of these TikTokers are reporting side effects from normal pieces of green glass, echoing a 2001 psychological study where participants felt the same spiritual impact from meditating with real and fake pieces of quartz. This looks like a widespread case of the placebo effect in action, coupled with TikTok’s alarming ability to spread scary urban legends.