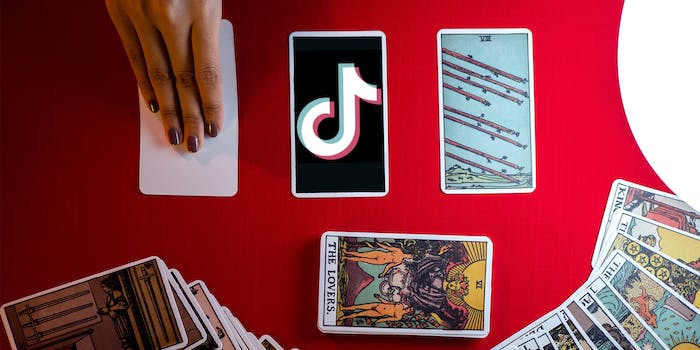 TikTok is ushering in a new era of witchcraft

In Netflix’s Chilling Adventures of Sabrina, actress Kiernan Shipka’s blond, teenage witch protagonist has a problem that faces many young magical folk. She’s newly enrolled in the Academy of Unseen Arts, a fictional witches and warlocks boarding school, while still attending “regular” high school in her hometown of Greendale’s Baxter High. Soon into the show’s first season, Sabrina accepts that she must separate her magical life from her “normal” life and restrict her full powers around her friends.

In Sabrina Spellman’s case, the double life—tackling math classes and worshiping Satan all at once—makes for an entertaining television series. It also surprisingly parallels the real-life experiences of a group of self-identifying witches who can be found exchanging 60-second videos in their own little corner of the internet.

On TikTok, the witch community is eclectic. The Daily Dot interviewed young students who want to normalize conversations about witchcraft and magic on social media, while embodying the idea that there is no singular way to be a witch. Indeed, their individuality can clash, and they grapple with the push-pull of private versus public witchery.

But unlike people in other digital corners, witches are often focused on self-healing and education. The online result is wholesome—and wicked popular.

Gigi is an 18-year-old from Atlanta and has more than 40,000 followers on TikTok under the alias @whoframedgigi. She calls herself a hedge witch, which means she practices her craft solitarily, with a deep connection to nature and spirit. Gigi said in her own journey, she realized Catholicism wasn’t the path for her, and Wicca came as enlightenment.

“I was meditating one day, and I just felt this really bright light come over me,” Gigi told the Daily Dot. “I felt really warm. And this was in the middle of the winter—it was freezing outside. I started getting all these visuals and stuff.” 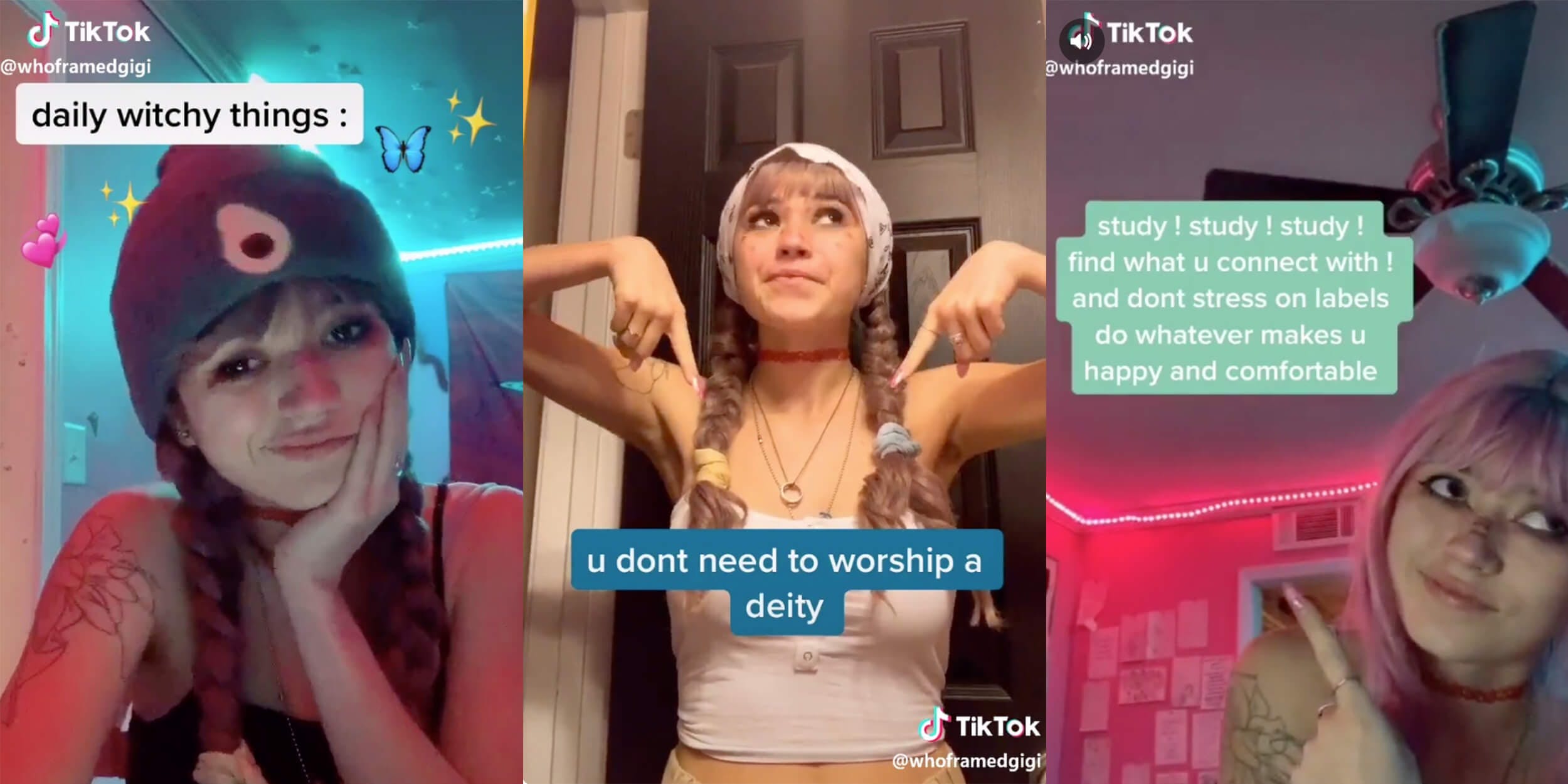 In one popular video with over 49,000 likes, Gigi explains that “you don’t have to be Wiccan” in order to be a witch.

Though its interpretations and practices vary widely, Wicca is a Pagan religion that incorporates pre-Christian traditions. Followers may worship Wiccan deities, the God and Goddess, and choose “to live in harmony with nature,” according to Wicca Living. Witches, on the other hand, “harness the natural energies at work in the Universe” via the use of magic (or “magick,” as it’s sometimes written to differentiate from stage tricks).

Today, witches are multifaceted. And they’re keen on debunking ancient myths, according to a 2018 article by Sophie Saint Thomas in Allure. One of the biggest is who and what a witch really is. “If you feel an urge to exert your will and get what you want (while fighting the patriarchy and practicing intersectional feminism, of course), you qualify,” Thomas wrote. “A witch is simply someone who is aware of their own power and puts that power into action.”

Groups or gatherings of witches with similar ideals are called covens. Covens form out of curiosity, like the desire to learn more about oneself or the mystics of Wicca and witchcraft. A coven can be formally assembled and require an initiation to join. Or it can be informal messaging with a Facebook group of witches who share home remedies, crystals, or spells to cast during a solar eclipse.

Gigi said she learned about Wicca from her mom, who practiced until she was told by her coven’s high priestess to stop after negative energy kept latching onto her. But modern-day witchcraft isn’t as restricted. Now young witches like Gigi can control their craft in any way—and on any medium—they choose.

On TikTok, Gigi appears in heavy makeup and colorful wigs to make videos for her 41,000 followers. In music-backed clips, she gives “baby witches” advice, like what to study (types of witches and crystals) and how to get back into witchcraft after a break. And she comforts people who don’t yet know their “path”—i.e., a type of spiritual practice a witch can choose to follow.

Gigi advises studying before casting spells, keeping journals or a book of shadows—like a grimoire, or a textbook of spells and magic practices—and that it’s most important to trust in yourself during your practices. But even with a massive online audience, Gigi said a lot of her friends at her Catholic high school had no idea she was a witch until seeing her videos on TikTok.

“I don’t think I told anybody about any of [my witchcraft] because I was already the goth kid who got in trouble a lot in religion class for disagreeing with what the teacher was saying,” Gigi told the Daily Dot. “I don’t have anything against the core beliefs of being Catholic. I think faith is really interesting. I just have a problem with the politics of it, so [going to Catholic school] was definitely really hard. I didn’t need them to call me a satanist, too.”

Notably, several of the witches that the Daily Dot talked to reject the idea of worshipping the devil. Gaby Herstik, an author and columnist from Los Angeles, identifies as a glamour and an eclectic, neopagan witch. She incorporates traditions from multiple paths in her practice with an emphasis on beauty and style.

“[Glamour] can be through wearing something specific, like black and spikes if I want to feel safe and protected, or wearing pink and red lipstick and rose perfume if I want to attract more love and sensuality in my life,” Herstik told the Daily Dot. “I also utilize glamour by enchanting jewelry for a specific intention—called talismans-—and by wearing jewelry that’s been passed to me through family and loved ones.”

Herstik isn’t on TikTok but posts much of her craft on her Instagram account, which has more than 31,000 followers and is dedicated to education about modern-day witchcraft. She posts astrology-based ritual guides and weekly mantras, like her recent New Moon in Aquarius guide—a helpful follow-along to “explore how our truth, our vision and our passion can positively impact the collective and help the evolution of the planet,” Herstik wrote. 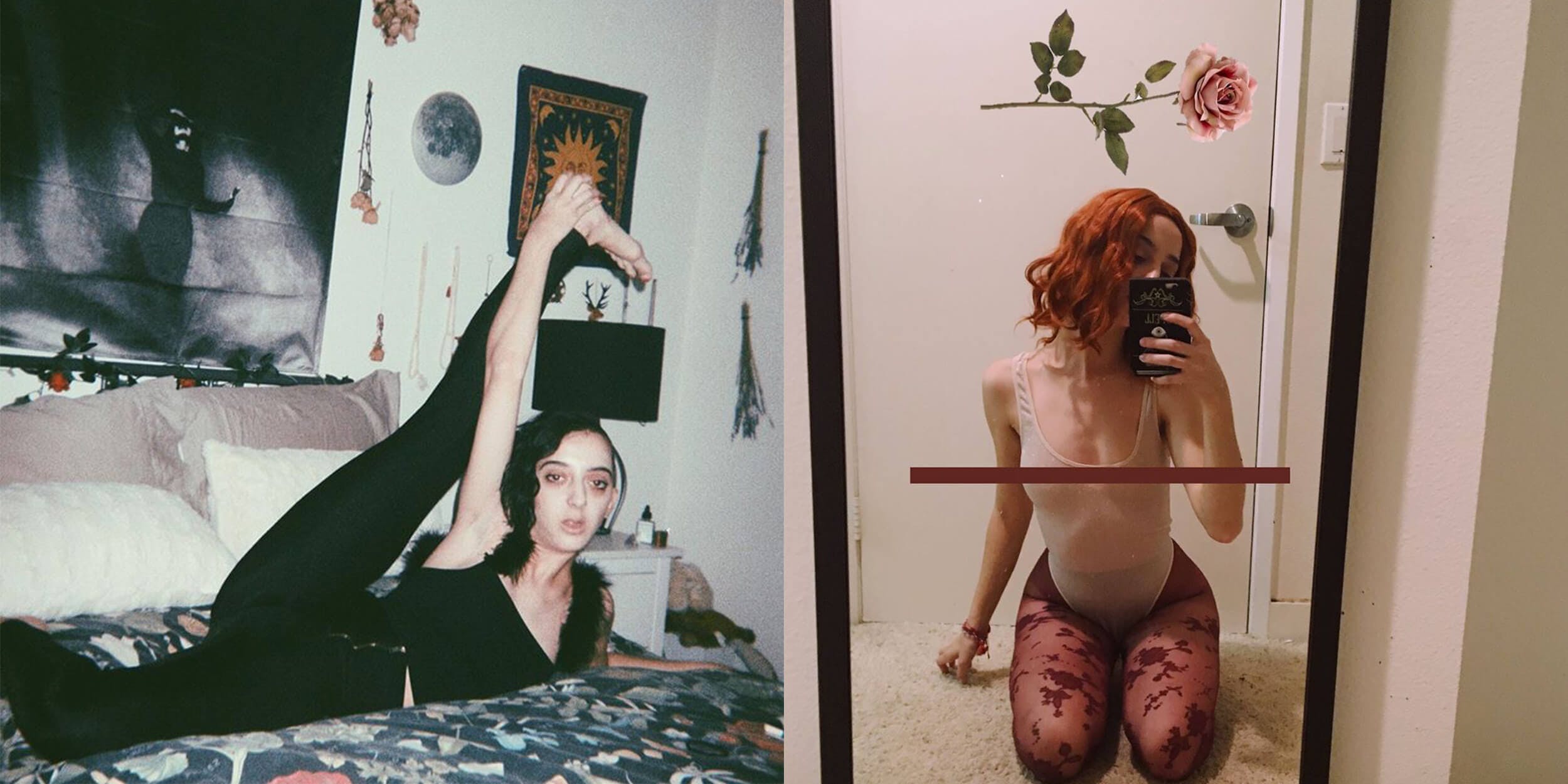 Herstik also explained “white-washing,” which she defined as certain witches considering witchcraft to be a strictly positive, “all love and light” practice.

“I believe in shadow work, maybe even more than I believe in healing because I think that healing is a never-ending process,” Herstik said. “And I really believe in the power of anger and [in] the dark goddess and shadow work because we’re human, and if you want to feel love and light, then you have to make room for darkness. That’s the law of polarity—things exist on a spectrum.”

Shawn Engel is a spiritual mentor and founder of Witchy Wisdoms, a blog and brand-strategy website personalized for witch entrepreneurs. On TikTok, she goes by @witchywisdoms. Engel says that today, there are infinite types of witches, practices, and levels of education. And in a large community with so many options—and personalities—there’s inevitably friction between bands of witches.

“It’s a shame because the whole point of witchcraft is to kind of break the mold of the patriarchy and think about your own independence and your own personal power,” Engel said. “So when there’s rifts in the community, that doesn’t necessarily make sense.”

She acknowledges that there are gatekeepers—not necessarily on TikTok but in the witch community in general—who attempt to dictate how and what every witch should practice. Engel even posted a funny clip directed at gatekeepers with the caption “just mind ya business.” With her own content, Engel uses a comical touch to teach.

“I like to keep my online presence educational,” Engel said. “If I can educate somebody with my personal experience, I will share it in the hopes that it will uplift my community. In one quirky clip, she explains the difference between a love spell and a love hex. (Spoiler: The answer is rose petals.)

Isa Blair, an 18-year-old attending college in Colorado, is known as a “popular creator” on TikTok under the username @blairbitchproject. Her account, with 48,000 followers and over 2 million total likes, showcases her identity as a kitchen witch, which Blair said involves “focus on herbology, flowers, nature” to aid herself, friends, and family. But she explained there are challenges that come with being a real-life, full-time witch and a full-time college student.

“On Tik Tok—and on the internet, in general—it’s a lot easier to show what you want and who you want to be,” Blair said. Her double life was exacerbated last year during Imbolc, an important day in the Celtic calendar and for the Wiccan community, which celebrates the half-way mark to spring. In her February 2019 Instagram post honoring the day, Blair wore a long, white dress complemented with a white, baby’s breath flower headpiece. But when she actually went out in public—still commemorating the holiday—she said she was “probably just wearing jeans and a T-shirt.”

She also described her impromptu, “Broke College Student” yule log—a decorative object that exemplifies light over darkness during the winter solstice—and how she chose to present it for TikTok users: An elegant array of three lit candles; white-barked sticks she found outside; different-sized jars containing herbs like lavender, basil, and rose quartz; and two oranges sitting at opposite ends of her altar. Blair said it was nothing compared to “the really pretty one I’ll probably post on Instagram.” 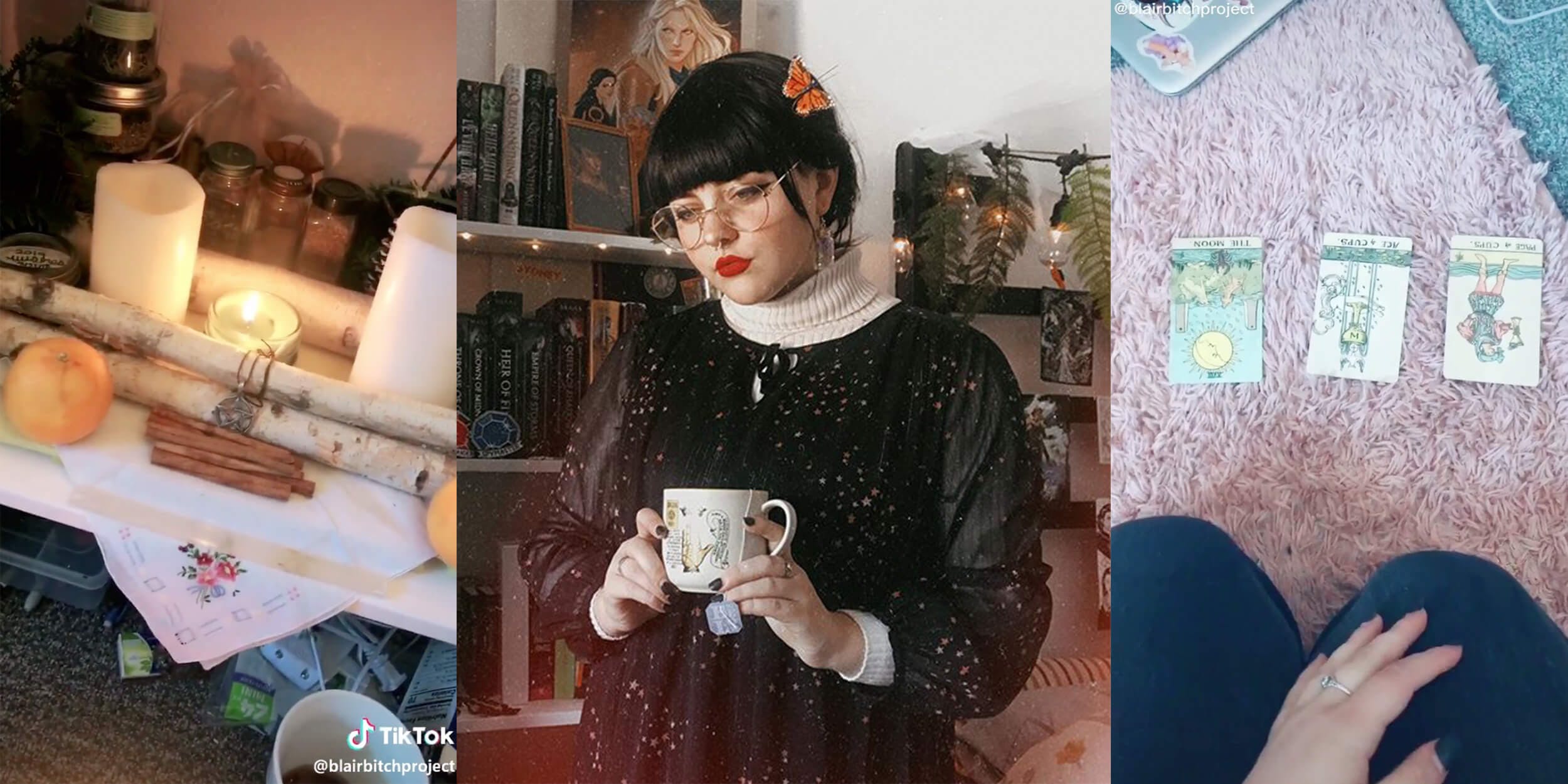 Regardless of the pieces of her practice she makes available for people to see on TikTok, Blair frames her everyday life with rituals. She meditates in the morning, showers as a daily cleanse, and keeps a “little pouch of herbs for good luck” over her bed during a college exam week. She said witchcraft is all about your mind and the intentions for why you do something.

Karly Graham doesn’t identify as a witch, but she follows witch-like and supernatural-esque topics online. As a sophomore at Michigan State University who studies journalism, she knows being in college “is really hard and scary sometimes.” So for six years, she’s used the internet—sites like Cafe Astrology and more recently the popular app Co-Star—to learn about topics deemed mystical or out of the ordinary. To Graham, it’s also an escape that offers peace of mind.

“I’m not a religious person, so having something like astrology or Tarot [cards] to fall back on for answers is soothing to me,” Graham said. “I know they don’t hold the answers to all of life’s questions, but if I’m having a bad day I might check my horoscope to see if my day matches it; or, I’ll draw my own tarot and when I pull a ten of swords it makes sense. [But] when people make fun of me for putting a little bit of faith into them, it can be frustrating.”

Witchcraft and astrology-adjacent content on social media—and specifically on TikTok—have added and nurtured a space purposed to educate and guide. It’s undefined what it means to be a witch; the tools for anyone to learn are literally clicks away. It’s helped give a number of witches a transparency they never before possessed, which Herstik describes as a “coming home.”

“The power of believing in something bigger than myself was [always] in myself and it manifested in a way I still can’t understand,” Herstik said. “Once you realize that things are made of energy, that your thoughts create things, that the cycle of the moon does impact you, it makes so much sense. There’s so much clarity that for most of us, even if we wanted to go back, we can’t.”

Wolfgang Ruth is a freelance writer whose writing has appeared in NYLON, GQ, i-D, and Refinery29.