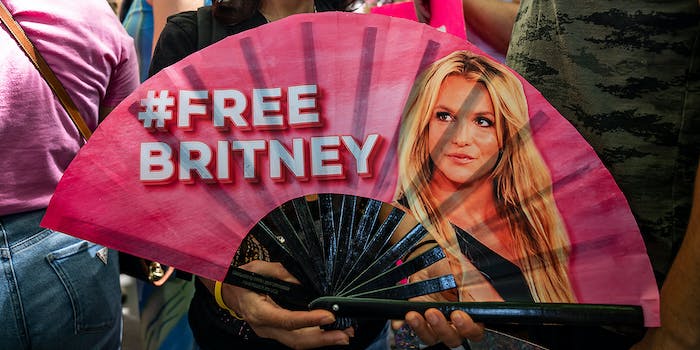 After Spears’ shocking testimony, online activists behind #FreeBritney reflect on the last 12 years

The singer recently petitioned to have her father removed from her conservatorship.

In June 2021, Britney Spears gave shocking testimony about her 13-year conservatorship. The singer spoke for the first time publicly about abuse, coercion, and corruption. It validated years of advocacy by #FreeBritney.

#FreeBritney is a network of fans and activists, working to expose Spears’ conservatorship and prove she is capable of living independently. While many more people are now aware of the complex situation Spears is in, there’s an equally complex history.

What is #FreeBritney, what’s a conservatorship, and what happens next for Britney Spears? Here’s what you need to know.

#FreeBritney is a global movement that aims to raise awareness not just about Spears’ conservatorship, but other cases of conservatorship abuse. It doesn’t technically have one central representative or founder.

Miller tells the Daily Dot that after revisiting those early posts more recently, he forgot how “outraged” he was then. Jamie Spears, Britney’s father, tried to shut the site down in 2009.

There was momentum around the movement in the decade that followed; city and state-specific chapters, like Free Britney L.A., appeared. #FreeBritney shifted in April 2019, when Barbara Gray and Tess Barker, hosts of the podcast Britney’s Gram, did a special episode.

While they typically analyze Spears’ Instagram posts on the podcast, this episode was more urgent: They received a voicemail from a former paralegal on her conservatorship who claimed Spears was being held in a psychiatric facility against her will after refusing her medication. The hosts claimed they verified the person’s identity, though that info has never been made public.

This revelation kicked off a second wave, as social media pushed #FreeBritney into the mainstream conversation. Gray created a pink and white image for social media that was widely shared. In February, Gray and Barker appeared in the documentary Framing Britney Spears, which drew out more celebrity support.

“I’m honestly astounded at the magnitude of what it’s become,” Miller says of #FreeBritney. “And I’m grateful to have played a role in this. And I do recognize this is a team effort.”

A conservatorship or guardianship is typically put in place when a person is deemed “legally incompetent,” says David Hutt, deputy executive director for legal services and general counsel for the National Disability Rights Network. That could mean the elderly or those with dementia, or people with intellectual disabilities.

California is one of the few states that uses the term conservatorship—guardianship is more common. Under either, a court-appointed guardian handles both financial and personal decisions. They can be a professional or public guardian, or a family member, depending on the state.

Hutt says there’s a “complete lack of data” at the state level regarding how many people are actually in guardianships. That can also make guardianship abuse harder to find. The 2018 documentary The Guardians (and 2021 Netflix film I Care a Lot ) showed just how insidious—and lucrative—guardianships can be.

Jamie Spears enacted the conservatorship in California in late 2008, giving him (and, until 2019, co-conservator Andrew Wallet) control over his daughter’s finances and personal decisions. Professional conservator Jodi Montgomery was appointed in September 2019.

The conservatorship came in part because of Spears’ mental health struggles at the time. But it was originally supposed to be temporary. A New Yorker article details the fraught lead-up to the conservatorship, and how swiftly it happened. Jamie Spears, or someone working for him, checked a box on the conservatorship form that said Britney had dementia. However, she continued to work and perform over the next decade.

While Spears is certainly the most high-profile conservatee, Hutt says her case isn’t an “outlier.”

“It’s not frequent that someone is able to, what we call, get their rights restored and get out of the conservatorship,” he says.

For younger people who perhaps have intellectual disabilities, a guardianship might not still be needed as they mature and learn. But Hutt says the issue is that guardians often don’t “check up,” and the person in the guardianship often doesn’t know they can advocate to restore their rights. The term “civil death” is used in cases where someone has been almost completely stripped of their rights.

Over the last few years, Spears’ Instagram became not just a place for fans to keep up, but a source for online sleuths. After Britney’s Gram dropped its bombshell episode in 2019, that analysis only increased.

By the summer of 2020, some followers had slipped into conspiracy theory mode, sure that certain posts—or colors or words—were calls for help.

Last summer, Kevin Wu of Free Britney L.A. told the Daily Dot that while he doesn’t “subscribe to many of the conspiracy theories, I recognize that they’re a consequence of [her] team’s mystifying lack of transparency.”

Now that Spears is speaking out, the claim that #FreeBritney is a conspiracy—pushed by her father last year—lost power. Spears’ Instagram is still full of energetic dance moves and inspirational quotes, but she’s also been more direct: In July she thanked fans for supporting her as she takes control of her legal representation. She also used the #FreeBritney hashtag.

But there are still fan theories about who runs her account. One claim is that Spears isn’t in control of her Instagram and that she doesn’t always write the posts.

Cassie Petrey, her social media manager, was accused of writing posts for her, though she’s denied that claim, and dismissed theories about Spears sending cryptic messages via Instagram. In a now-deleted Instagram post, Petrey also denied being hired by Lou Taylor, a business manager who was reportedly instrumental in Spears’ conservatorship. Nonetheless, people continue to call out Petrey (often using the pseudonym C4ss1e) in the comments of Britney’s posts.

New attorney Mathew Rosengart, who’s previously represented Madonna and Winona Ryder, filed a petition on July 26 asking the court to replace Jamie Spears with an interim conservator. But Spears also wants to charge her father with conservatorship abuse. In the petition, Rosengart stated that Jamie Spears has been “paying himself $16,000 per month… which is $2,000 more than he has allotted to his daughter” for more than a decade, the Los Angeles Times reported.

Britney’s case is already having a ripple effect. The bipartisan FREE Act seeks to give those in a guardianship the right to replace a court-appointed guardian with a public one, and require guardians to prove they have no financial conflict of interest. But #FreeBritney activists have been critical of the bill as proposed, stating that it doesn’t do enough to help people out of guardianships.

Hutt says the bill is a “good start,” but that “most of the reform is going to have to happen at the state level.”

And Britney Spears still has some legal battles to fight. The next hearing is scheduled for Sept. 29.

On Aug. 12, Jamie Spears agreed to step down as conservator, in response to Rosengart’s petition to remove him. According to court documents, “Mr. Spears intends to work with the Court and his daughter’s new attorney to prepare for an orderly transition to a new conservator.” However, the documents also state that there are “no actual grounds” for removing him, and that Spears contests “this unjustified Petition for his removal.”

On Sept. 7, Jamie Spears filed a petition to end the conservatorship. The filing states that “Recent events related to this conservatorship have called into question whether circumstances have changed to such an extent that grounds for establishment of a conservatorship may no longer exist or that this conservatorship may no longer be required.” In a statement, Rosengart called the filing a “massive legal victory,” but added: “To the extent Mr. Spears believes he can try to avoid accountability and justice, including sitting for a sworn deposition and answering other discovery under oath, he is incorrect, and our investigation into financial mismanagement and other issues will continue.”