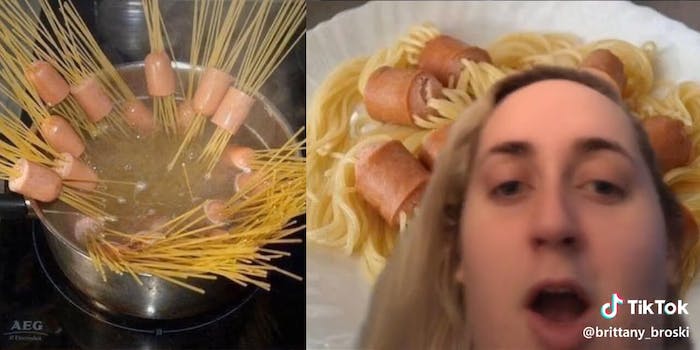 Kombucha girl is back with ‘noodle weenie dogs’

Brittany Tomlinson altered the very fabric of the reaction meme in August when she tried kombucha for the first time, earning her the names “kombucha girl” and also “kombucha woman.” She’s recreated the meme for people IRL, but she’s more than just that TikTok.

Tomlinson shows her range and reach in a more recent TikTok, where she explains her “ma” is cooking dinner for her “boys,” then proceeds to roll call the boys and advertise the night’s special: noodle weenie dogs.

What are noodle weenie dogs? Well, it’s apparently something that mutated from Tomlinson’s TikTok; people have made tutorials for this monstrosity, which is essentially hot dog bits stabbed through with uncooked spaghetti.

It’s been animated, too.

And there are plenty of creative riffs on the meme.

when the noodle weenie dogs come out tender and delicious pic.twitter.com/M7ZEGip61A