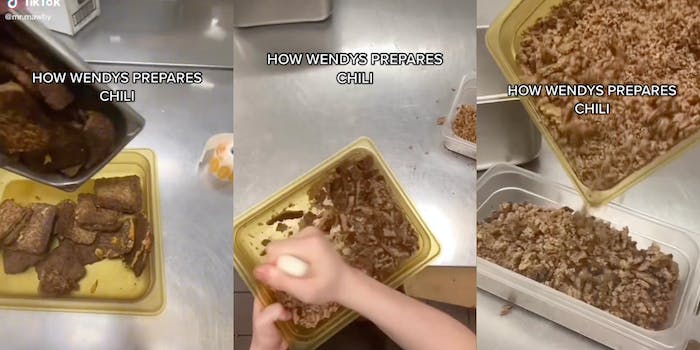 ‘It goes in the fridge for a few days after this’: Wendy’s worker shows how chili is prepared in viral TikTok

‘And imma keep ordering it too.’

TikTokers have never shied away from exposing various fast-food chains for how they make some of their most popular dishes. And now, Wendy’s is on the chopping block after a user revealed how the restaurant prepares its chili.

It’s not immediately clear if the poster, @mr.mawby, is the Wendy’s employee in the video. However, this is the second video on his account “exposing” the chain’s food. The latest TikTok of the chili has over 7 million views.

In the video, an employee dumps “old dry pattys” into a container before soaking them in tap water. Then, the patty dish goes into the microwave to cook for a bit. After that, the employee drains some of the water from the container and mashes the ground beef into bite-sized bits. The hamburger bits are then transferred to a bag where it sits in the store’s refrigerator.

“It goes in the fridge for a few days after this,” the video caption reads.

The video concludes without actually showing how the rest of the chili is made. On Wendy’s website, it boasts that their recipe also includes items like beans, tomatoes, onions, and celery.

A handful of commenters, however, were appalled that this is how Wendy’s made its chili.

“I could’ve [gone] the rest of my life without knowing this,” another user said.

Other viewers saw no issue with Wendy’s recipe, though. Many applauded the restaurant for not wasting old meat and said they still planned on ordering chili there in the future.

“Yea it be bussin,” one TikToker said. “No fast food finna be 5 star so idc.”

“And imma keep ordering it too,” wrote another commenter.

“Okay? Was I supposed to expect you grew it on a chili tree??” questioned a third viewer.

The Daily Dot has reached out to @mr.mawby via TikTok comment and Wendy’s via email.