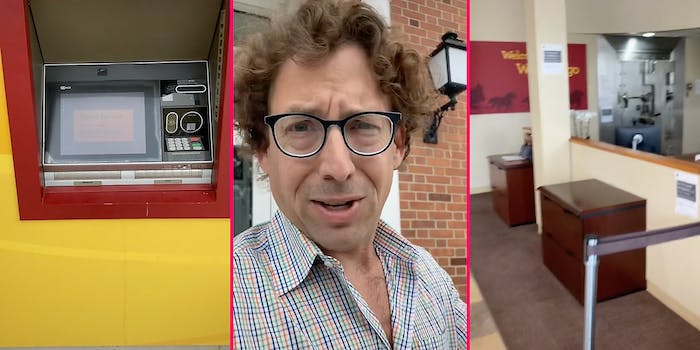 Filmed and posted by @professormometer, he starts the video standing in front of an ATM at a Connecticut bank branch.

“I thought it was interesting that I made a deposit, and it wouldn’t give me a receipt or my card back,” he says. “Offered me to either have a new card shipped in the mail or go inside the branch.”

He walks around to the Wells Fargo bank branch door, and he walks in as an average person would. As he walks in, the deadbolt lock on the door is extended but the door was not shut properly, suggesting the closing employee had attempted to lock up.

The bank’s weekend hours extend only to Saturday, from 9am to noon. Judging by the relative time of day that he walks in, it means the branch was unsecured over 16 hours or more.

“And I walked inside my Wells Fargo branch, and I noticed the damnedest thing—there’s nobody here,” he continues as he shows an empty branch, with everything, including the vault, open to see.

“Could it possibly be because it’s Sunday?” he asks.

Wells Fargo is currently enmeshed in criticism over its closing of all personal credit lines, which may damage the credit scores of thousands of customers.

The Daily Dot has reached out to Wells Fargo and @professormometer.