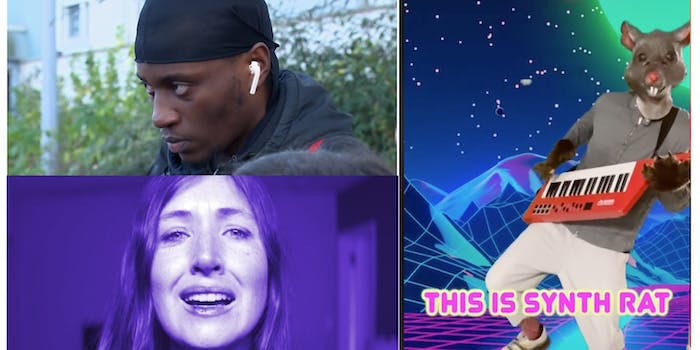 This week in internet culture: Rat synth TikTok and a new horror film

Also: The memes of the week.

Well, he finally did it. On Thursday, Trump signed an executive order that essentially bans TikTok’s parent company. (More on what that means for TikTok creators, below.) In today’s Internet Insider:

A Week of Very Good Memes

Since mid-March, meme culture has revolved around our new reality—quarantining at home, not seeing family or friends, wearing masks, not taking vacations, and working from home (if you’re lucky enough to have work). There’s also plenty of depression and isolation memes, which existed pre-coronavirus but now feel particularly relevant.

In the last few weeks, we’ve seen more “classic” memes emerge that aren’t about the dumpster fire year that is 2020, and it’s a welcome relief. Sure, cake memes died shortly after they went viral, but thinking about objects and people who could actually be cake was a distraction from our nightly doomscrolling. This week gave us even more good memes—so many that it was hard to pick one for my “meme of the week” entry (below).

First, Jonathan Swan’s recorded interview with President Donald Trump gifted us with many stills of Swan looking perplexed, which could be applied to just about anything. Next, Rihanna taking out the trash while wearing pink heels and diamonds for a photoshoot in Harper’s Bazaar became another perfect Rihanna object-labeling meme. A picture of French rapper JNR wearing AirPods and a serious expression, paired with a screengrab of a song, became another meme to reveal what you were listening to. Finally, Reese Witherspoon started a 2020 calendar meme, which celebrities jumped on. Sure, that last one is about our current reality, but it copied a familiar meme format that Dolly Parton employed last year.

What Part of TikTok Are You On?

TikTok is often viewed as a generator of viral dances and challenges, but there are countless subcultures and niche aesthetics that populate it, with art specific to those communities. And some of it won’t translate to other apps if a U.S. ban actually happens. What will happen to micro-communities like Juul and Teletubby TikTok? Can Shrek TikTok find another audience?

Do the right thing if you want to be an indie director––let Spike Lee show you how it’s done.

Ominously psychedelic, She Dies Tomorrow arrives with a simple premise: recovering alcoholic Amy (Kate Lyn Sheil) is absolutely certain she will die tomorrow. Actor/filmmaker Amy Seimetz wrote, produced, and directed this movie, funding the whole production with her paycheck from starring in the Stephen King movie Pet Sematary. She and Kate Lyn Sheil share an interest in dark sensibilities, with Sheil (a prolific low-budget indie actor) best known for horror movies like The Sacrament and You’re Next, and the experimental docudrama Kate Plays Christine, where she plays a newscaster who killed herself on live TV.

Meme of the Week

What are you listening to?