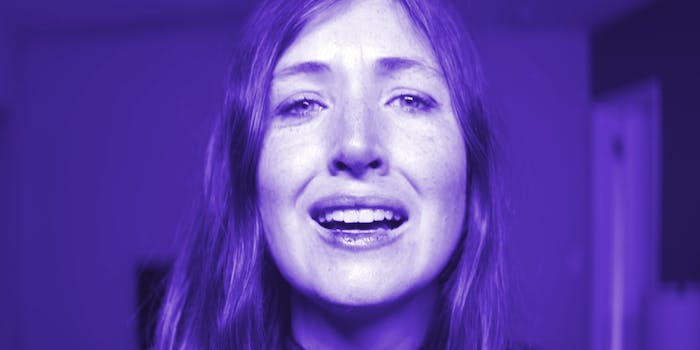 Review: ‘She Dies Tomorrow’ is a genre-bending horror film for our isolated era

Out now, it's a disturbing yet morbidly funny indie drama about a psychological contagian.

Ominously psychedelic, She Dies Tomorrow arrives with a simple premise: recovering alcoholic Amy (Kate Lyn Sheil) is absolutely certain she will die tomorrow. She wanders around her half-unpacked new house listening to the Lacrimosa from Mozart’s Requiem in D Minor on repeat: a track that films and TV shows often employ for moments of gothic melodrama (Hannibal, Watchmen) but in this case is very clearly depression music. An iconic interpretation of the Catholic funeral mass, it was left incomplete because Mozart died halfway through writing it. Amy knows she will die tomorrow, and her certainty brings with it a kind of morbid humor.

For the first act, Amy is subdued and possibly dissociating a little, but when a friend shows up to check if she’s okay, Amy pitches the idea of having her skin turned into a leather jacket after she dies. Her friend, Jane (Jane Adams) is unamused, interpreting Amy’s mood as a self-destructive relapse into drinking. Which technically it is, but only because there’s no point in staying sober when you’re going to die tomorrow.

Actor/filmmaker Amy Seimetz wrote, produced, and directed this movie, funding the whole production with her paycheck from starring in the Stephen King movie Pet Sematary. She and Kate Lyn Sheil share an interest in dark sensibilities, with Sheil (a prolific low-budget indie actor) best known for horror movies like The Sacrament and You’re Next, and the experimental docudrama Kate Plays Christine, where she plays a newscaster who killed herself on live TV.

Directly inspired by Seimetz’s experiences with anxiety, She Dies Tomorrow has the title of an in-your-face horror flick, but is more genre-defying in practice. It’s disturbing, but more in the sense that you shouldn’t watch it if you’re in an emotionally fragile state. This isn’t the kind of movie that gives you clear, tropey explanations for its central conceit. Now screening in drive-in theaters, one wonders what it must be like to see an art film about (basically) suicidal ideation, while trapped in your car in a darkened parking lot. Not that it will be easier to handle at home, since She Dies Tomorrow begins with Amy feeling isolated and freaked out while alone in her apartment, a mood that soon expands through her social circle. You see, her sense of oncoming death is contagious.

She Dies Tomorrow is too weird and obscure to feel like a direct allegory for anything specific, but a lot of its conversation scenes are pretty clearly about people trying and failing to talk about mental illness. A character will explain clearly that they know they’re going to die tomorrow, and then their friend will either disagree, or willfully misunderstand the statement.

Doing great work on a small budget, a film like this lives and dies on its cast. Kate Lyn Sheil is mesmerizing in the lead role, with Jane Adams giving a squirrelly, eccentric performance as the next person to pick up the contagion. Among the supporting cast we have Chris Messina, Tunde Adebimpe and a surprising cameo from Michelle Rodriguez, whose cynical tone works just as well here as it does in her usual action blockbuster roles.
Crossing over between horror, psychological drama and dark comedy, She Dies Tomorrow is disorienting and hypnotic, joining a handful of new films that were perfectly (and accidentally) pitched to tap into pandemic-related anxieties. A feel-bad movie, but actually much easier to watch than it sounds.

She Dies Tomorrow is available in drive-in theaters and on VOD.