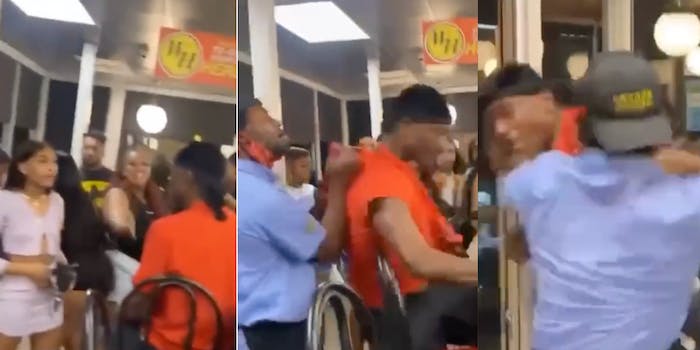 ‘No civilian should ever attempt to fight a Waffle House cook’: Viral video shows Waffle House employee and customer fighting

'The most fearsome hands are those of the employees.'

A viral video of an altercation between a Waffle House employee and customer has viewers wondering if all Waffle House workers are trained fighters.

The video was originally uploaded to Twitter by ATL Uncensored, a social media brand that posts video submissions of news around Atlanta. In the video, a group of women are seen arguing with a male customer. It’s unclear what was said before the video started, but one of the women can be heard saying, “You should never say that.” She’s later heard saying “let it go” after another woman engages with the man.

The video garnered a lot of attention on Twitter, making its way to the trending page, and viewers had a lot of jokes about the restaurant’s tough workers.

The restaurant has a notorious reputation for chaotic fights. The Daily Dot reported on an altercation at a different Waffle House location last month. And last year, another fight between a Waffle House employee and customer went viral on Reddit.

One user, who says they are a former employee, said, plain and simple, Waffle House workers are “not someone to be fucked with.”