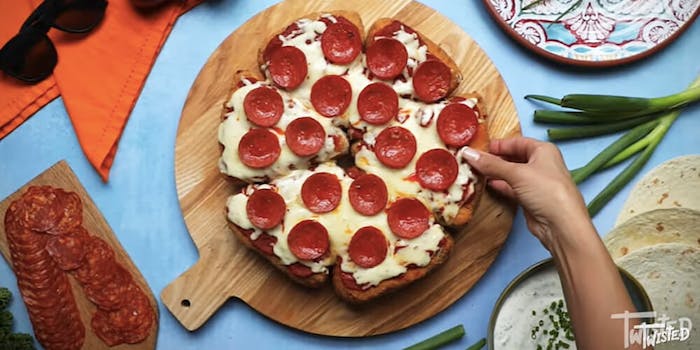 It’s easy to see how people get sucked into watching recipe videos online. Websites such as BuzzFeed’s Tasty or Delish feature appetizing, eye-catching tutorials that even the most novice of chefs can easily follow along with. Sometimes people become fascinated with these type of videos for completely different reasons. Yes, we’re talking about the fried BBQ chicken tortilla pizza.

The recipe, which comes to us from U.K.-based food blog Twisted, is technically called the “Deep Fried BBQ Chicken Stuffed Pizzadilla.” Apparently the concept of pizzadillas is not entirely new, as a Google search turns up no shortage of recipes. However, this one is almost definitely the most rancid-looking one out there.

Let’s dig in, shall we? (In a purely metaphorical sense.)

This monster contains six chicken breasts seasoned with BBQ rub, then baked and shredded, and combined with bacon, onions, cheese, and BBQ sauce.

The mix is stuffed into a cake pan between two tortillas, chilled, cut into six wedges–and then dredged with breadcrumbs and deep-fried–only to be reassembled and topped with pizza sauce, more cheese, and pepperoni. Oh, and one can’t forget the parsley-dill “ranch” dressing that it’s intended to be served with.

After perusing the other videos uploaded to Twisted’s YouTube channel, it doesn’t appear to be intentionally trolling.

Over the weekend, Twitter user @_kurlykay stumbled across the video and shared it, causing the heinous recipe to go viral. “Okay but I just wanna know WHY?????” she wrote.

okay but I just wanna know WHY????? pic.twitter.com/BF49YX2jyc

The video was viewed millions of times, and many were quick to express their disgust and disbelief.

“There were SO many moments I thought this train to hell would stop and let me off,” Twitter user @BasicBlaecGirl relatably wrote.

watching this video is like when they arrest somebody 15 minutes into an episode of SVU. you get to fully marinated, baked, and shredded chicken and there's too much time left, you know you're being set up for a roller coaster that asks you to suspend disbelief too frequently https://t.co/G4Df5Ij7vI

Every time I thought this was over it just got more insane https://t.co/vWDhLC8cSO

Yet, at least one brave soul out there looked at the deep-fried BBQ chicken tortilla pizza recipe and thought: “Let’s so this.”

People food editor Shay Spence tweeted on Sunday, “Kind of tempted to make that deep-fried BBQ chicken deep dish quesadilla pepperoni pizza tonight.” And sure enough, some hours and a trip to the grocery store later, Spence invited his followers to join him on the adventure.

will be posting the highlights on this thread but for a time-stamped play-by-play please follow along on my insta story: https://t.co/A7XxtnhnVx

It didn’t take long for Spence to discover that something was amiss with this “recipe.”

“The spice measurements are a lie!!!!!!” Spence wrote, along with a side-by-side of the original BBQ-marinated chicken and his sad-looking bland chicken.

The spice measurements are a lie!!!!!! pic.twitter.com/SjTIAIVqde

the tortilla does not fit the pan, a minor roadblock pic.twitter.com/RwLFAQm3wJ

Slicing and preparing for the deep frying came with its own set of challenges. When Spence sliced the pizzadilla, an absolute mess oozed out of it.

It’s taking longer than anticipated bc you have to freeze these bastards after every step so they don’t fall apart. Thank u for staying with me on my journey

I can taste the finish line pic.twitter.com/rsHXSYmKtG

Somehow, Spence was miraculously able to get the slices to survive deep frying, and then it was time to add the pizza topping and bake it.

Finally, some six-and-a-half hours after he began the recipe, it was time for the moment of truth.

This is it. The moment you’ve been waiting for all night. pic.twitter.com/Lo8Lc89zYz

In the final video, Spence wasn’t even able to get down a single bite of the dish before getting up to spit it in the trash.

“I expected to like it in a gross-good kind of way,” he tweeted. “But the mixture of the sweet BBQ sauce, the pizza sauce and the dill sour cream … truly one of the most vile things I’ve ever eaten.”

Thank you to all who offered to Venmo me for ingredients, however I will not accept it. Instead please follow me on Instagram so I can one day make money trying to sell you teeth whitener https://t.co/A7XxtnhnVx

So, now we know: The viral pizzadilla is just as gross as it looks. And shout out to Spence, who somehow managed to make a cursed recipe all the more cursed.