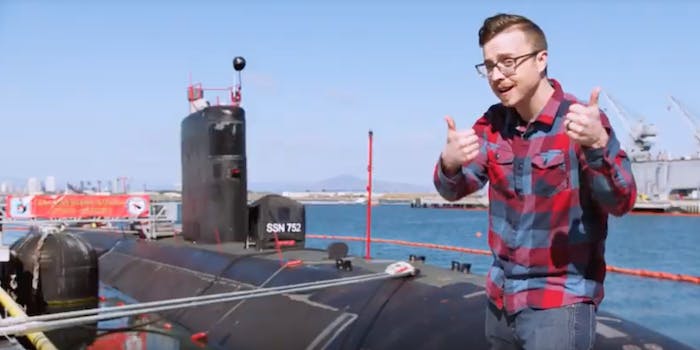 The Navy is using YouTube to recruit Gen Zers

The U.S. Navy is looking for some tech-savvy sailors to recruit, and it is turning to YouTube influencers in order to do so. The Navy just dropped a one-minute trailer on the platform to advertise its upcoming recruitment effort: A series meant to inspire Gen Zers to sign up.

In the series, sailors will go head-to-head with top YouTube creators–Kevin Lieber (Vsauce2), Jake Koehler (DALLMYD),  and William Osman–to test their speed, smarts, and skills. The Navy worked with a few agencies including VMLY&R, Wavemaker, and Google’s Brand Unit team, to identify influencers who would be perfect to feature in the recruitment content. All three of the YouTubers were tapped, specifically because of their focus in science and math. In the series, Osman chats with a cybersecurity team, Lieber is seen aboard a nuclear submarine, and Koehler works with an explosives specialist.

Despite its usual reliance on television and other more traditional mediums, the Navy is taking a different approach to appeal to the younger generation, in hopes of filling the 50,000 roles that remain open this year.

“For our audience now, if they want to find something, they’re using the search engine on YouTube,” Captain Matt Boren, the chief marketing officer at U.S. Navy Recruiting Command, told TechCrunch. “We had to be where our audience was.”

Boren hopes the new influencer marketing campaigns will better reach younger potential recruits give them a deeper look at what a career in the Navy would really look like.

“We do a good job of reaching those who already show a desire to join, but it’s important to look in new places and present the Navy in a new context,” Boren explained. “Partnering with YouTube creators allows us to get away from the ‘shoot ‘em up’ military ads teens are used to seeing and provide an authentic look into life as a sailor.”