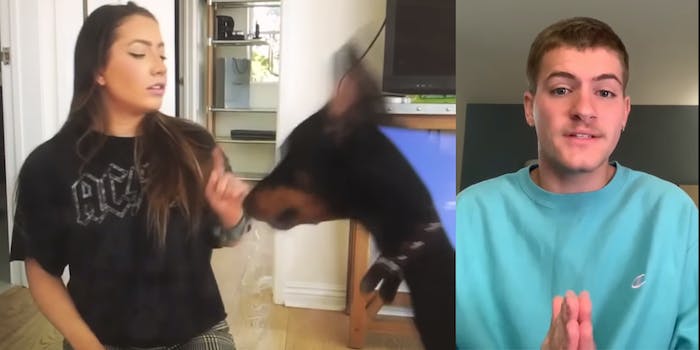 She allegedly tossed his Miniature Schnauzer in the past.

After widespread outrage over a viral video of YouTuber Brooke Houts pushing, hitting, and what looks like spitting on her dog, her ex-boyfriend Dolan Henrikson is coming forward with concerns that her actions in the video were not a one-time occurrence.

Henrikson and Houts dated in 2017. During their one-year relationship, Houts, who lives in California, visited Henrikson in Florida. In an interview with the Daily Dot, Henrikson said that Houts acted strangely with his dog during her weeks-long visit. She repeatedly pushed his Miniature Schnauzer away from the couple, not wanting it to be around them. He said Houts would even toss the dog onto the ground “as if it was a cat.”

“It had been done a couple times [throwing the dog],” Henrikson said. “At the time, I was not a confrontational person, and I didn’t want to make the trip awkward. But, overall I was just confused [about] why she didn’t like my dog.”

He said that he wouldn’t classify the situation as “abusive,” but believed it to be a “red flag” and a hint that the video of Houts hitting her dog was likely not an isolated incident.

Henrikson also talked about his experience with Houts on YouTube gossip host Keemstar’s show, Drama Alert. In the video released Wednesday, Henrikson said he thinks that Houts should no longer be allowed to own the dog.

“She is not a fan of animals, or she doesn’t like to treat animals with the same respect as if you would treat a human being,” Henrikson said in the video.

Henrikson is not the only person saying she shouldn’t keep the dog. YouTuber Ethan Klein, known for making Israeli-American comedy videos with his wife, tweeted to Houts that he would be willing to adopt the dog.

“Im in la and will literally buy your dog from you name any price, he really does need a new home,” Klein tweeted on Wednesday. “I’m serious btw my dms are open to you.”

Im in la and will literally buy your dog from you name any price, he really does need a new home.

Houts has over 300,000 subscribers on YouTube and is partly known for fun videos with her Doberman. She has videos titled, “my REAL morning routine with my doberman puppy,” and “mine & my doberman puppy’s favorite things to do together!”

In her most recent YouTube post, she accidentally uploaded an unedited version of the video, which showed her hitting her dog. It has since been deleted.

On Aug. 6, the YouTuber released a statement on Twitter about the viral video and the social media backlash that ensued. Houts said that things in her personal life caused her to act frustrated and on edge. She also apologized for her actions.

“Anyone who knows me personally knows I have an immense love for animals, including my own,” she wrote in a tweet. “My love for [the dog] is exponential and infinite, and I do everything in my day-to-day life to ensure that he is living as happily as he can. I’m sorry that my actions in that particular moment did not reflect that.”

To everyone who has been commenting on my social media as of recently: pic.twitter.com/gnxUbfVHdf

The Los Angeles Police Department is now investigating her for animal abuse. The Daily Dot has reached out to Houts.

Henrikson later told the Daily Dot that he regretted speaking publicly against his ex and said he was “wrong” for “humiliating” her.