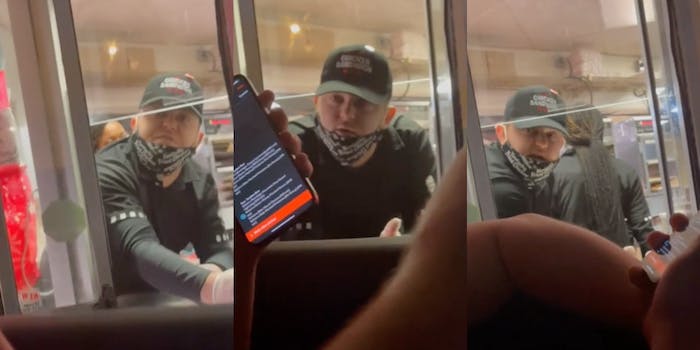 A video that was trending on Reddit’s r/PublicFreakout forum on Thursday shows a KFC employee in Springfield, Illinois, calling customers homophobic slurs in the drive-thru.

The video begins after the altercation has already started, and both parties are agitated. However, the queer-bashing KFC employee is just getting started a homophobic rant.

“I don’t give a fuck about no video,” the KFC employee says. “This ain’t the first time I’ve been on video.”

“You cursed at us, and you’re at work. Why?” says one of the customers from a car.

The employee sticks his head out of the drive-thru window and says, “You’re fucking queer. Why?”

“You just called me a queer?” the driver says.

“You’re a fat ass bitch,” someone says from the backseat.

“We’re really gay, that’s the thing,” the passenger says. “You can’t do that.”

The KFC employee apparently doesn’t realize that using “queer” as a slur is especially offensive to people who identify as LGBTQ. “I don’t give a fuck if y’all are gay or not,” the employee says. “This motherfucker looks queer so he can get the fuck out of here.”

“You’re gonna lose your job. I hope you know that,” says the person filming.

At that moment, a manager arrives and removes the employee from the drive-thru window, and the video ends. Just as it wraps up, the driver dials and calls 911.