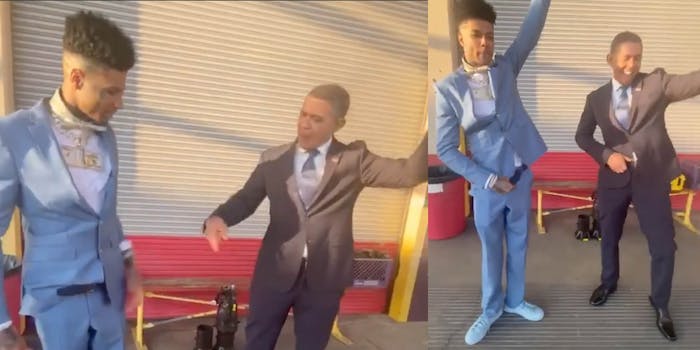 'I really thought Blueface had Obama doing the Thotiana for a second.'

A 10-second clip and photos of rapper Blueface with an impersonator of former President Barack Obama is tricking some people online.

The impersonator was actually featured in the music video for Blueface’s collaboration with DaBaby, “Obama.”

The impersonator, Reggie Brown, has also shared a set photo on his own Instagram.

“Ain’t no business like showbusiness,” Brown captioned the photo. “You never know what opportunity tomorrow will bring. Do what you do best and don’t stop.”

The video of Blueface and “Obama” dancing was reposted to Twitter, where it went viral, prompting many to post their knee-jerk reactions.

“When everybody was playing Brother Blueface for all of his amateur actions I kept saying ‘he’s just a kid that needs some guidance,'” Twitter user @AyeYoTina wrote. “Now look at him, dancing with President Obama.”

Another user was shook that Blueface got to meet Obama. The purported interaction even gave them hope.

Not everyone fell for it, though. According to BET, the impersonator’s voice is what tipped off some fans to realize that they were not looking at the real deal.

“I really thought Blueface had Obama doing the Thotiana for a second,” Twitter user @hotindastreets wrote.

Over on Instagram, one other thing that tipped users off was Brown’s dancing skills.

Other commenters are referring to Brown as “Great Value” or “Walmart” Obama.