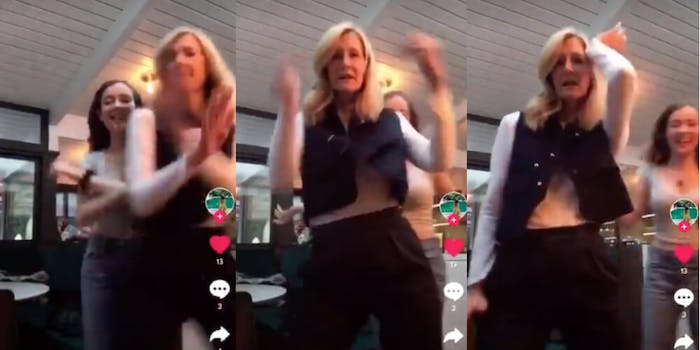 Dern shoved her daughter out of the way to take over her TikTok.

Move over, teens. TikTok’s got a brand new star, and it’s none other than everyone’s fave, Laura Dern.

The Big Little Lies actress recently made a guest appearance on daughter Jaya Harper’s TikTok, and fans absolutely lost it.

The clip features 15-year-old Harper starting to dance to “Say So” by Doja Cat before Mama Dern pops in and knocks her out of frame, totally stealing the scene with her own dance moves.

Dern is one of those celebrities that has come to be adored by all across the board. From providing us with endless meme content in Big Little Lies to “pew pew”-ing her way through Star Wars, it’s basically impossible not to just want to candidly support her in everything she does. Even if that something is pushing her own kid aside to bust a move on Gen Z’s favorite social media platform.

“i want to log laura dern shoving her daughter to the ground on tiktok and give it five stars,” one Twitter user said.

laura dern singlehandedly ending the careers of every other person on tiktok pic.twitter.com/7ixIVFz0Z8

Do not get me wrong. I love Laura Dern.

And as accomplished as Dern is as an actor, many fans were quick to say this may, in fact, be her best work.

Forget Marriage Story, Laura Dern is winning an oscar for this TikTok https://t.co/Fqfb9G74Ah

Best film of the decade is the tiktok of Laura dern dancing to Doja Cat pic.twitter.com/vYs27tyknu

laura dern a tiktok sensation is there anything she can’t do!?

for your consideration in all categories: laura dern crashing her daughter’s tiktok

And that's why she survived Jurassic Park :)

Dern’s Big Little Lies co-star, Reese Witherspoon, has also been making quite a splash on TikTok. Fans were quick to point out that if the two of them were to combine their social media powers, they could probably take over the entire platform. (Sorry Gen Z.)

But even if–heaven forbid–this is the only Laura Dern TikTok content we ever receive, it was totally worth it. If not for the dance moves, then definitely for the comments the video received.

why would someone comment this on laura dern’s daughter’s tiktok SDKFKDBCN pic.twitter.com/E1vIE4Xccy

Whatever Dern does with her career next, we are obviously totally here for it. But fingers crossed it involves TikTok. Dreamers gotta dream.