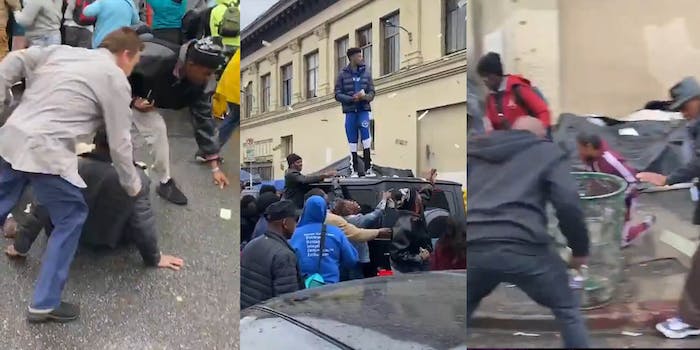 Blueface accused of ‘humiliating’ the needy by throwing money at them

Video shows people scrambling to collect the money off the ground.

“Thotiana” rapper Blueface is getting slammed for throwing cash at people who are most likely poor or homeless on Skid Row in Los Angeles.

A video is circulating of Blueface standing atop a car throwing fistfuls of cash at people who are scrambling to grab the money on the ground below him.

Considering he tweeted the video himself with the caption, “the season of giving,” Blueface appears to see nothing wrong with his actions.

But people on Twitter are criticizing the rapper for “humiliating” people in need.

“Tt’s disrespectful and wrong on so many levels. If you’re going to give back do something like Jaden and set up a food truck, give shoes and clothes. Don’t make these people dance for money,” Twitter user @CreativeK wrote.

Rapper, Blueface traveled to Skid Row in Downtown, Los Angeles today to give back to those in need during this holiday season. pic.twitter.com/9L37n9aZdM

Many pointed out that while Blueface’s intent was likely good, the way he went about it was wrong.

“Your heart may have been in the right place and maybe your privilege created blindspots for you, but you cannot help people by humiliating them. The little cash they scraped from the ground isn’t enough to help. There were more effective ways to help,” Twitter user @adarayaffa wrote.

#Blueface, your heart may have been in the right place and maybe your privilege created blindspots for you, but you cannot help people by humiliating them. The little cash they scraped from the ground isn’t enough to help. There were more effective ways to help. https://t.co/mWbEGE6UOp

This is one of the most disgusting things I’ve ever seen in my life. Blueface and everyone who supports him should be ashamed. https://t.co/8AXvpPDpEF

the thing that makes blue face a loser is this: he was giving to be seen. he wasn’t out there being a nice person. that mf was making poor people scrape money off the ground. making an already degrading experience even more degrading. he’s an asshole.

Blueface, whose real name is Jonathan Porter, is not the only rapper attempting to help less fortunate communities this holiday season. Rapper Lil Pump helped give away free food and jackets to the homeless on Skid Row earlier this week with various nonprofit groups.

Blueface has not yet publically responded to the criticism.