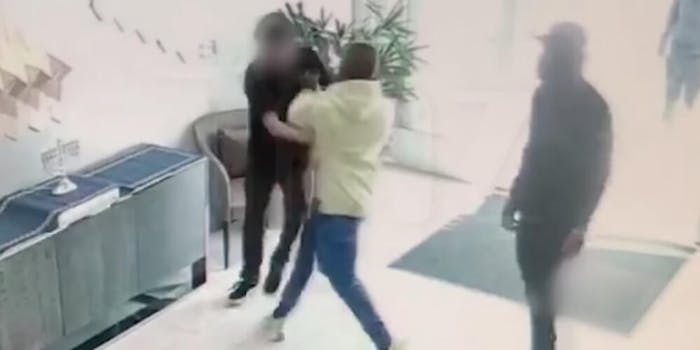 DaBaby says he was protecting his child.

DaBaby is setting the record straight about a recently emerged video.

The video, which was obtained and shared by TMZ, shows the 28-year-old rapper shoving a hotel employee in Los Angeles on Dec. 19. The incident apparently occurred after the employee requested a photo of DaBaby, which the rapper refused. After the employee and DaBaby walked back into the lobby, things got heated. DaBaby shoved the man into a chair before appearing to exchange terse words. After the video emerged, DaBaby—whose real name is Jonathan Lyndale Kirk—told his side of the story on Instagram.

According to DaBaby, the altercation escalated due to concerns for his 2-year-old daughter’s safety. “The hotel worker you see me ‘pushing’ came up to me outside the hotel & asked could he record a video of me while I was holding my 2 year old daughter,” he wrote. “I calmly and respectfully said no and explained to him that him posting a video of me at the time would compromise the safety of me and my child by letting social media know where we were staying.”

Even after “politely” asking him not to record, the worker continued to record DaBaby and his daughter from afar for Snapchat.

“I then handed my daughter to her uncle and walked over to him as he was typing his caption on the video of me and my child not knowing that I saw him record it and that I was over his shoulder watching him type the caption,” the Instagram post continues.

DaBaby explained that he then told the employee to delete the video and return to work, noting that the man wasn’t “professional enough to abide by company policy while doing his job outside of the hotel.”

“Upon entering the hotel I made him sit down and understand the fact that NO video is worth the safety of my child being compromised,” DaBaby wrote. “Being a celebrity and being liked by the public is cool & all but ima father before anything and my number 1 priority is providing for and protecting the interest of my child. And anybody that don’t respect that I don’t want your respect.”

The rapper concluded his Instagram explanation by calling out both TMZ and the Beverly Hills AC Hotel. He informed both that, if the full story and video footage are not provided, his legal team will be in contact.