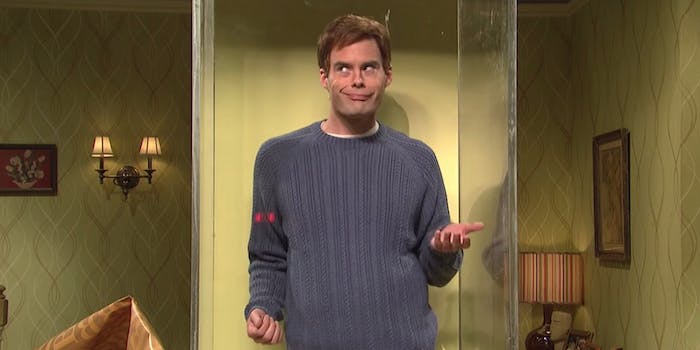 The video somehow goes with every song.

Bill Hader is once again a Twitter meme—and this time he’s dancing perfectly to the beat. An entire account dedicated to one of the actor’s Saturday Night Live skits has gained more than 6,000 followers in less than two weeks.

@billhaderdancin repeatedly tweets the same 25-second clip of Hader dancing. The clip is set to different audio, like Fleetwood Mac’s “Dreams,” Danny Elfman’s “This is Halloween,” or the voiceover of It actor Jack Dylan Grazer apologizing for smoking pot.

The account, which launched Sept. 17, and has accumulated thousands of views, with its most popular video getting more than 36,000 likes.

Samantha, the creator the account who declined to share her last name, told the Daily Dot in a direct message that she started the account after a friend suggested editing in different music to the video.

But people love it. No matter the tune, Hader’s dad-like dance moves from the Saturday Night Live sketch “Alan” seem to work perfectly.

the song fits somehow I- pic.twitter.com/e2DVwmow2X

Hader received attention on Twitter earlier this month after photos of him running away from Bill Skarsgård on the set of It Chapter Two surfaced and became a meme of their own.