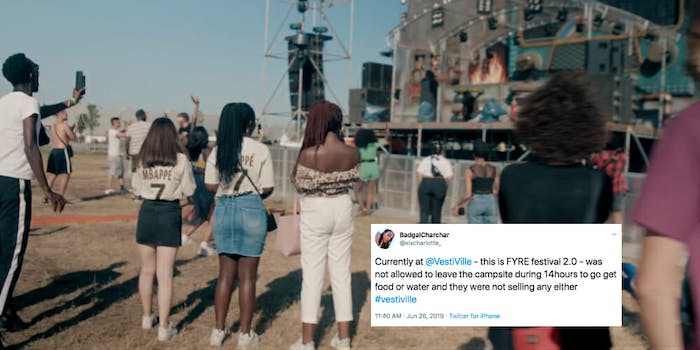 A music festival promising the biggest names in hip-hop and a five-star experience that fans will travel from all over the world for turned out to be a flop. Sound familiar?

VestiVille, which was described as being positioned to become “the premier urban music experience in Europe,” was supposed to take place in Lommel, Belgium, this weekend–from June 28 to 30. It was an absolute disaster, earning it the alternative description of yet another Fyre Festival.

VestiVille’s lineup included huge names such as Cardi B, Future, Meek Mill, Migos, A$AP Rocky, Jason Derulo, Ashanti, and more. After fans waited for hours to get in the opening day–some, after traveling great distances–they were met with the news that the festival was canceled.

The reason for the cancelation was reportedly due to safety concerns flagged by A$AP Rocky, who was not even slated to perform until the last day.

“I won’t be performing today due to security and infrastructure concerns which relate to the production of the show,” the rapper said in a statement on Twitter. “The promoters told me it would be handled but unfortunately for you and me they didn’t.”

That was apparently not the only issue plaguing VestiVille. Those who did get in tweeted about the squalid and chaotic conditions inside the festival, such as no food or water being sold and no re-entry permitted.

It didn’t take long for the “festival” goers to draw comparisons to yet another spectacularly failed music festival–Fyre Festival, which was supposed to take place in the Bahamas in 2017. It was founded by Billy McFarland and Ja Rule and billed as a “luxury music festival.” Now, we all know how that turned out.

Currently at @VestiVille – this is FYRE festival 2.0 – was not allowed to leave the campsite during 14hours to go get food or water and they were not selling any either #vestiville

Police were waiting inside with dogs for people to start running in instead of defusing and getting us to leave safely pic.twitter.com/S6T5Kr7DHG

Shortly after the event was declared a flop, VestiVille organizers posted an official cancelation notice on social media. The organizers claimed that the Mayor of Lommel refused to let the festival go on while also citing A$AP Rocky’s security concerns.

Although no refunds were promised for the pricey festival, organizers said that they would “consult with their official partners.”

Today at 5:00 PM the mayor of Lommel decided to not let Vestiville start. After consultation with the security services…

Still, many pointed out that, well, music fans should have known it was destined to be doomed when they saw Ja Rule’s involvement with VestiVille.

Yall saw JA RULE on the #Vestiville lineup and STILL BOUGHT TICKETS?! Lmfaooo yall are really dumber than i thought.

Fyre fest: Euro edition
Someone please get Jarule to explain the situation

And others joked about an eventual Netflix documentary.

It seems like this isn’t a lesson we should need to relearn in 2019, but–between Fyre, the since-canceled Woodstock 50, and now VestiVille–if a music festival seems too good to be true, that’s probably because is.