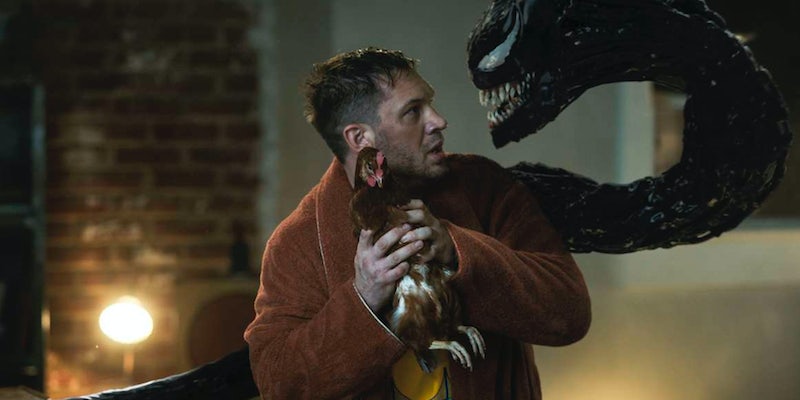 ‘Venom: Let There Be Carnage’ is silly and loud, but gets weighed down by its villain

The 'Venom' sequel is still fun, but really exists for its post-credits scene.

Venom: Let There Be Carnage is in a silly, goofy mood.

The follow-up to 2018’s Venom, which wasn’t exactly a box-office hit but gave us a greasy, frenzied Tom Hardy performance, keeps the slapstick vibe intact. At just 97 minutes, it’s mercifully short for a superhero movie, but it also doesn’t feel like it wants to be a superhero movie anymore.

Venom: Let There Be Carnage

When we meet up again with investigative journalist Eddie Brock (Hardy) and Venom, the symbiote that has attached itself to him, they’ve settled into a domestic life that involves Venom chaotically cooking him breakfast and Eddie keeping live chickens around to satisfy Venom’s cravings for human brains. He’s stuck, professionally, and when imprisoned serial killer Cletus Kasady (Woody Harrelson) asks to meet with him, Venom starts helping Eddie figure out clues and details for Kasady’s previously unsolved murders. (This should be a whole spin-off idea.)

They bicker, as an alien and its human host often do, and during one of their spats Hardy asserts, “I’m a real boy.” It is, perhaps, meant to be heartfelt but the way Hardy delivers it is funny. (He is again employing a hard-to-place accent.) There is a scene after their big breakup where Venom, unable to find the same connection in other bodies, stumbles into a costumed rave and gets sentimental about Eddie. There’s something to unpack from this scene, but it seems like we’re just supposed to laugh at the sight of hulking, heartbroken ancient alien draped in glowstick necklaces.

Humor is Venom’s strength (see: the improvised lobster scene in the first film), and the franchise is a welcome respite from the more serious Marvel fare. Director Andy Serkis, perhaps drawing on his own experience playing a man overtaken by a creature, frames the duality of Eddie/Venom well, but the addition of the necessary bad guy zaps the film of its zany energy.

Michelle Williams returns as Anne, Eddie’s ex, and she seems a little more energized this time. She has also been given a better wig but, unfortunately, now Harrelson has a bad one. While he gives an, uh, energetic performance as Cletus, who becomes Carnage after biting Eddie and ingesting his symbiote blood, his post-prison look is a bit confounding, recalling a PG-13 Natural Born Killers. He doesn’t have much personality (and, alternately, neither does Carnage) and at one point he actually says, “Let there be carnage.”

His relationship with Shriek (Naomie Harris, her talent sadly wasted here) doesn’t help establish much. Shriek, also known as Frances Barrison, has the power of scream, and she’s been held for years at the Ravencroft Institute, after her powers became too strong. (There’s also a new backstory, showing that Cletus and Frances met at a reform school as teenagers, though Harrelson is 15 years older than Harris.)  Shriek and Carnage team up to obliterate Venom, but the big fight scene is a messy blur of black and red that will likely leave you wanting to just see Eddie and Venom bicker again.

The film’s big reveal happens in the post-credits scene, after Venom and Eddie have fled to Mexico. It cleverly drops a pin in Spider-Man: No Way Home, suggesting Venom might finally be part of the MCU, a possibility opened up by Loki. If Hardy’s actually in Spiderman: No Way Home, it’s one of the best-kept secrets around that film.