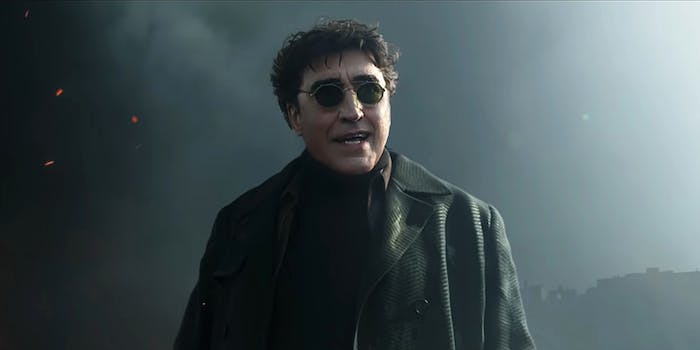 Is ‘Spider-Man: No Way Home’ introducing the Sinister Six?

There are more villains than meets the eye.

The first trailer for Spider-Man: No Way Home is here, and if it wasn’t evident enough from the footage, Spider-Man is about to get weird. New York City is breathing down Peter Parker’s neck, he and Doctor Strange appear to open up the multiverse, and a parade of villains are about to descend onto the scene.

The end of the No Way Home trailer revealed that Alfred Molina’s Doc Ock, the memorable villain of Spider-Man 2, has now emerged into the MCU. With a simple “Hello Peter” (although whether it’s directed to Tom Holland’s Peter Parker or another, we’ll have to wait), Doc Ock makes his mark. He’s far from the only Spider-Man villain to make his mark, suggesting that we might be seeing the MCU’s take on the Sinister Six.

The Sinister Six, a group of Spider-Man supervillains who try to team up to take down the webbed slinger, can trace their origins all the way back to The Amazing Spider-Man Annual #1, which was first published in 1964. In that issue, Doc Ock reached out to every villain who tried to defeat Spider-Man (and failed), resulting in five others—Mysterio, Electro, the Sandman, Vulture, and Kraven the Hunter—teaming up with him and kidnapping both Aunt May and Betty Brant, resulting in Spider-Man defeating all of them again.

Over the years, Marvel’s brought back many different iterations of the Sinister Six, depending on which villains were around, so the membership isn’t one that’s set in stone, and at one point, Sony had a Sinister Six movie in development.

Out of the original six members of the Sinister Six, only one of them, Kraven the Hunter, has yet to grace the screen thanks to a series of canceled Spider-Man sequels that planned to use him. (According to Variety, Sony cast Aaron Taylor-Johnson to play the villain in a standalone movie that will be released in January 2023.) But between Sam Raimi’s Spider-Man trilogy, the two Amazing Spider-Man movies, and the MCU’s Spider-Man movies, the others have already shown up in one way or another. Thanks to the multiverse, many of them might just converge onto the MCU alongside Tobey Maguire and Andrew Garfield’s Peter Parkers.

Who might make up the MCU’s Sinister Six? Based on the trailer, we have visual confirmation of at least three and as many as five. And while Molina is confirmed as reprising his role, we don’t necessarily know if that’s the case for all of the villains.

Who is in the MCU’s Sinister Six?

Status at the end of the movie: Deceased

Visual in No Way Home: Pumpkin bomb and a sinister laugh

Out of the Spider-Man villains who might appear, Willem Dafoe’s Norman Osborn’s death and aftermath are shown on the screen; he’s impaled by his own glider and then Maguire’s Spider-Man returned Osborn’s body back home. But whether your main reference point is Spider-Man or The Lighthouse, there’s no mistaking that iconically maniacal Willem Dafoe laugh.

Status at the end of the movie: Presumed dead

Visual in No Way Home: Metal tentacles and face

Did Doc Ock actually die at the end of Spider-Man 2? We presumed so; after starting out as the villain, he chose a more heroic sacrifice himself to plunge an unstable fusion reactor into the East River. According to Molina, who confirmed he was in No Way Home months before the trailer dropped, told Variety that he was informed his return would be picked up from “that moment” at the end of Spider-Man 2, so it’s likely he’s brought into the MCU instead of drowning.

Status at the end of the movie: Alive

Visual in No Way Home: Waves of sand during a fight with Spider-Man

While Spider-Man 3 had its fair share of villains, Thomas Haden Church’s Sandman was the most sympathetic—and given that he’s the one who pulled the trigger on Uncle Ben, that’s saying something. At the end of the film, once all of the villains are defeated, Peter Parker forgives him and lets him live. Our sighting of the Sandman here is less about his person and more about his powers: Toward the end of the trailer, we see waves of sand paired with lightning—perhaps a two-on-one fight?

Status at the end of the movie: Alive

Visual in No Way Home: A large, shadowed figure hitting what looks like a force field

While Dr. Curtis Connors appeared in Sam Raimi’s trilogy, a more beastly version of the character doesn’t emerge until The Amazing Spider-Man and is embodied by Rhys Ifans. While he regains his human body and is sent to a mental institution at the end of the film, it appears that the lizard form is back but kept away by some kind of invisible field. It’s hard to see much of anything in the shadows, but some fans have already tried to enhance the footage.

Status at the end of the movie: Dead

Visual in No Way Home: Lots of lightning

Jamie Foxx’s Electro (largely shown as a translucent, blue figure) is overloaded with electricity at the end of The Amazing Spider-Man 2, so it’s unclear how he returns to the mix. But there’s plenty of lightning throughout the film, and the trades announced that Foxx would reprise his role; in a deleted Instagram post, Foxx confirmed his character wouldn’t be blue in the film.

6) What about the sixth member?

Who might fill the shoes of the sixth member of the Sinister Six? Given that it’s Spider-Man, it could be anyone—and surprisingly, Sony and Marvel haven’t used all of their Spider-Man villains yet.

If we’re looking at The Amazing Spider-Man films, we could point to Paul Giamatti’s Rhino from The Amazing Spider-Man 2. Or, if Sony wanted to incorporate more comic book movie crossover potential, it could be Venom (Tom Hardy’s probably more so than Topher Grace’s from Spider-Man 3). We have two Harry Osborns (James Franco and Dane DeHaan). Most notably, we have Vulture (Michael Keaton), the villain of Spider-Man: Homecoming, still in prison for the crimes he committed in the film. And, given his use of tricks, are we really sure that Mysterio (Jake Gyllenhaal) is dead?

Or could it be Peter Parker himself? In the 2017 Spider-Man video game, Peter Parker is, at one point, brainwashed to become a member of the crew, so it’s possible that if that Maguire and Garfield show up, one of them could be temporarily turned against the other Peter Parkers.

If the MCU is really bringing six villains into the mix, at this point, it really could be anyone. Even the random guy some fans think is actually Daredevil can’t be thrown out as a suspect. Spider-Man: No Way Home releases in theaters on Dec. 17.