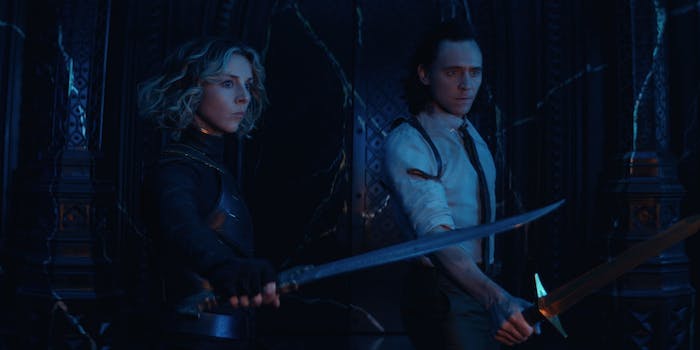 Recap: The ‘Loki’ finale is an hourlong teaser for the future of the MCU

This recap includes spoilers for Loki episode 6, “For All Time. Always.”

As is often the case with MCU projects, Loki‘s first season concludes not with a definitive ending, but with a veiled advertisement for the next phase of the MCU. And while there were some interesting moments (most notably a passionate duel between Loki and Sylvie), half the runtime was dedicated to straight exposition: A laborious explanation for why the MCU will soon expand into a multiverse rather than a single narrative timeline. This culminates in a final act that goes completely against Loki’s core themes as a character—but I’ll get to that in a minute.

For the latter half of the season, Loki has invited us to focus on one question: Who really controls the TVA? Episode 6 provides the answer, with Loki and Sylvie traveling to the end of time to meet Kang the Conqueror (Jonathan Majors), a classic Marvel villain. He reveals that their entire journey was preordained, tying into the show’s central conflict between predestination and free will. Then, Kang launches into a 20-minute introduction to his own backstory. In the 31st century, Kang was a scientist who discovered the existence of limitless parallel realities. Meanwhile, in those realities, Kang’s alternate selves discovered the same thing. After a brief period of collaboration, all the Kangs launched into an interdimensional war. One of them decided the only solution was to condense the multiverse into a Sacred Timeline with a single Kang as its leader, and the TVA as his enforcers. This timeline is the MCU.

Back at TVA headquarters, Mobius confronts Ravonna about her continuing dedication to a meaningless cause. If the TVA is based on a lie, then why bother? But this subplot remains on the backburner compared to Kang’s revelations about the Sacred Timeline—an overlong and unnecessary piece of exposition that’s only made bearable by two factors: Jonathan Majors is an incredibly compelling actor, and composer Natalie Holt knocks it out of the park with this week’s music. Kang is already a more intriguing and watchable figure than Thanos, which is a very positive sign for the next phase of the franchise. On the other hand (as I pointed out regarding the earlier fan theories about Kang), it’s kind of frustrating to end a six-episode miniseries with a Big Reveal starring a brand new character.

Kang offers Loki and Sylvie two options: Kill him and see the Sacred Timeline branch off into a multiverse, guaranteeing another Kang-on-Kang war… or replace Kang in his own domain, with Loki and Sylvie as the new heads of the TVA. The two immediately disagree, with Loki voicing the subtext of their clashing perspectives: Sylvie can’t trust anyone, and Loki can’t be trusted. Their partnership explodes into an athletic and emotionally charged swordfight across Kang’s office, ending with a kiss… which turns out to be a distraction, as Sylvie shoves Loki through a portal back to the TVA. This leaves Sylvie to kill Kang and consign the multiverse into disarray, while the camera lingers on a close-up of Tom Hiddleston’s agonized face. Yet another moment of heartbreak and abandonment for Loki.

We end with Loki breathlessly explaining to Mobius and Hunter B-15 that everything’s gone horribly wrong. Then we’re faced with a lurching realization: Mobius doesn’t recognize him. The TVA personnel have seemingly been memory-wiped again, and are now scrambling to deal with the newly branching timelines. The camera pans up to one of the Time-Keeper statues, which now wears Kang’s face. Credits.

While I understand the desire to give Kang a punchy introduction, I can’t agree with Marvel’s belief that big changes must be preceded by an in-depth explanation. The MCU’s multiverse phase—an era that will see crossovers between alternate universes, just like in the comics—doesn’t require a prologue. It’s perfectly fine to just have a portal appear in thin air while Doctor Strange exclaims, “The rift between universes has opened!” Done! In fact, that’s basically what Spider-Man: Into the Spider-Verse did. But for some reason the MCU wants to trudge through an info-dump of Kang’s greatest hits, reframing Loki as an explanatory prologue for future Marvel products.

Who is Loki now?

Last week, I touched upon the way Loki remolded its title character into a more traditional, self-sacrificing Marvel hero. Now a surprisingly downbeat figure, Loki’s sense of humor and mischief have vanished. And while Sylvie accuses him of being motivated by ambition (ie. a desire to usurp Kang’s godlike role), I’m inclined to believe Loki’s perspective on their final duel. He really is worried about Kang’s promise of an interdimensional war and wants to build a more peaceful life with Sylvie.

Thanks to Tom Hiddleston’s magnetic screen presence, you might easily fail to notice what a bizarre departure this is from Loki’s typical characterization. First of all, these final two episodes abandon Loki’s defining traits of deceit, manipulation, and fast-talking wit. He’s now an emotionally reactive hero who follows a traditional quest arc. Secondly, this final conflict sees Loki argue in favor of security, caution, and peace—a motive that feels better suited to a very different type of character.

It would make more sense for Loki to opt for chaos and then realize that he’s made the wrong choice; a new twist on his perpetual ambition-and-comeuppance cycle. Instead, the show discards the idea of Loki as an opposing force to the authoritarian TVA. After hearing Kang’s story, he perhaps begins to wonder if the TVA really is necessary after all.

But what is Loki if not a rulebreaker, rebelling against authority and straddling the line between good and evil? A character who is both literally and narratively queer, in a franchise full of straight people? An antidote to the typical structure of Marvel’s heroic arcs? This final episode disavows that role, buying into Kang’s promise that disrupting the Sacred Timeline will result in catastrophe. Despite the obvious fact that the TVA is an evil organization, the show hints that it may still be preferable to the other option. It’s similar to how earlier MCU stories critique the U.S. military or unveil fascist conspiracies within the government… but ultimately return to a respect for law and order, reminding us that SHIELD performs a useful service.

After Kang offered Loki and Sylvie a choice between perilous chaos and oppressive order, I kept waiting for Loki to suggest a third way. It’s precisely the kind of binary decision that he’s meant to reject. But apparently, Marvel doesn’t want to go there. Sneakiness and imagination just aren’t part of the plan.