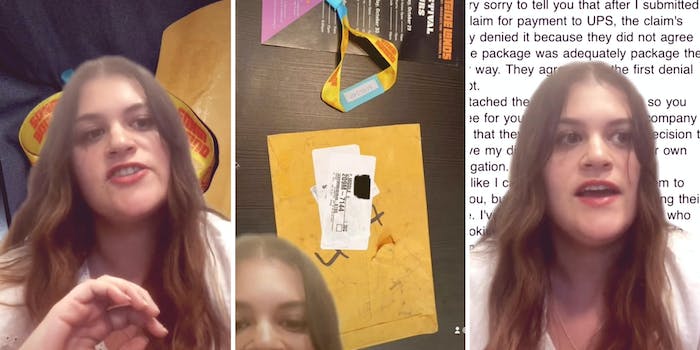 ‘This company is the epitome of corporate greed’: TikToker shares alleged ‘UPS horror story’ and claims its insurance is a scam

'They find any reason they can to deny coverage.'

In a viral TikTok video, one user claims that a UPS worker stole an item in her package, and the insurance company refused to accept her claim.

“For anyone who thinks big corporations aren’t still trying to screw you over, boy do I have a story for you. This is my UPS horror story,” user @kamikazecloud says in the video.

The user bought two three-day VIP wristbands for the San Francisco-based music festival Outside Lands from a friend for $900 each. When her friend sent off the wristbands through UPS, she purchased a $60 insurance policy, under which she had to disclose what was in the package and its total worth.

However, when the package arrived a couple days later, there was only one wristband in the package. There was also a “finger-sized” hole in the center of the envelope. The TikToker believes someone snagged one of her wristbands while it was in transit.

They then filed a claim with UPS to retrieve the worth of the missing wristband, but the user says the company denied it due to “insufficient packaging.”

“Sir, it doesn’t matter if it was in a different envelope or even a box. If someone wanted to get into my package, they’d find a way. The contents description were somewhere in the UPS system,” she says.

The user says that as the festival neared, she decided to sell the single pass they received to buy two one-day passes instead.

“Spent $1800 thinking we were getting two three-day VIP tickets and ended up with two one-day general admission tickets,” she says.

The user’s friend who shipped the wristbands went to a UPS store and got the manager to appeal the claim. However, she says it was once again denied by Crawford & Company, UPS’ claims agency.

In a letter she received from the company, the TikToker was told to contact Diane Butters with any issues. When she did, she says she was met with an out-of-office message and full voicemail box.

“But Crawford & Company can do an ‘investigation,’ and just decide not to pay it out. So I did my own investigation into Crawford […] They’ve been screwing over the average joe for 80 years.”

“And yeah, boo hoo, Crawford made it so I didn’t get to go to my concert, but it’s not just packages. They also deny worker’s comp, disability, medical claims, credit card fraud, and even people who have lost their homes to natural disasters,’” she continues, describing nearly 40 complaints on the Better Business Bureau.

The user questions the lack of repercussions for UPS workers breaking into packages, saying she doubts the company has attempted to find who allegedly took her wristband.

“This company is the epitome of corporate greed. They find any reason they can to deny coverage and if they can’t find one, as in my case, they make one up,” she says.

Her first video in the three-part TikTok series received over 300,000 views, and several users in the comments shared similar experiences.

“Yeah that was definitely broken into by a worker, i’ve had a package burst through ups and they repackaged it and sent it to me with everything in it,” one user said.”

“UPS stole both of my voodoo wristbands one year! thankfully they sent another pair and gave us a few extra goodies,” said another.

“Yeah, i filed a claim with ups months ago and they have completely ghosted me at this point,” a third said.

The Daily Dot reached out to user @kamikazecloud via TikTok comment and both UPS and Crawford & Company via email.